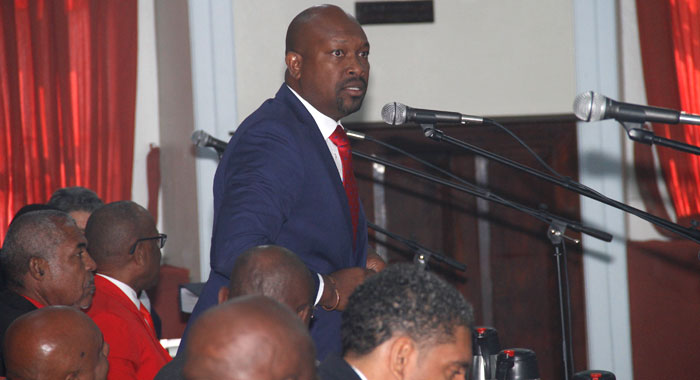 Is there a deeper meaning to Member of Parliament for South Central Windward, Saboto Caesar’s comments that Prime Minister Ralph Gonsalves does not have the moral or legal authority to speak for him?

That’s the question that some political observers have been mulling over since Caesar’s comments in Parliament last Wednesday.

The comments by the Minister of Agriculture — who was once seen as a strong contender to succeed Gonsalves as leader of the Unity Labour Party and prime minister — have put some political observers in a mood to do some analysing.

Some political observers have concluded that Caesar comments were merely meant to support what turned out to be a successful attempt to get House Speaker Jomo Thomas not to allow debate on the motion of no confidence that the opposition had brought against the government last week.

Some other political observers, however, say that Caesar’s comments have deeper meaning.

They noted that Caesar’s comments come against the backdrop of the decision by Minister of Finance, Camillo Gonsalves, supposedly following his advice of his father, the prime minister, to remain silent in response to former model Yugge Farrell’s claims that the younger Gonsalves cheated on his wife with her.

While the finance minister has remained silent, his father has taken to several radio stations commenting on the scandal and has also spoken about it at a press conference.

Many political observers believe that Camillo has eclipsed any chances that Caesar had of becoming prime minister as the older Gonsalves prepares to hand over the leadership of the ULP and the mantle of prime minister.

The prime minister has said that he would not lead the ULP into another election, but will seek re-election as member of Parliament for North Central Windward, which he has been representing since 1994.

“If I may say this, you are saying it would not be debated?” Caesar asked the speaker.

“It will never be debated,” Thomas response.

“But how are you certain that there aren’t persons on this side of this House who would vote with the opposition?” Caesar said.

“Because the prime minister said on Monday that he is absolutely certain that his eight will stand,” the speaker said, noting the prime minister’s comments when the opposition gave notice of the motion of no confidence.

“So you are basing the minds and the mens rea today with something that the prime minister said without consulting me?” said Caesar, who had signed an alternative motion of confidence submitted to the House on Wednesday.

“The prime minister can’t speak — Mr. Speaker, with respect, how can you say that the prime minister, he doesn’t have the moral or legal authority to speak on behalf of Saboto Caesar at anyplace at anytime in St. Vincent and the Grenadines and you do not know if I am going to vote with the opposition. You do not know that.”

“And until then, a division is needed,” Caesar said, in apparent support of the prime minister’s call for a division of the house on whether the motion of no confidence should be debated.

“That is all I am saying,” Caesar said and urged the Speaker not to continue “along that line with the historical issue with the honourable prime minister”, a reference to the Speaker’s chronicling of how the House had reacted when the prime minister had brought motions of no confidence when he was an opposition lawmaker.

“Let us take it to a vote,” Caesar further said, urging the speaker to go ahead with the division of the house.

“Honourable Minister of Agriculture, with all due respect, I think that presentation should have been made on Monday.”

“Mr. Speaker, with all due respect, I think you are making light of my presentation,” Caesar said.

“No, I am not,” the speaker responded.

“Mr. Speaker, with respect, you are making very light of what I said. I made a fundamental point.”

“I understand the fundamental point.”

“No, no, no, Mr. Speaker, I take it seriously what I just said about a debate, it should have been made on Monday. You have lost me, Mr. Speaker.”

“No, I did not say that a debate should have been made on Monday you know,” the speaker responded.

“You said the point should have been made on Monday.”

“I don’t think you are following. You have to follow the bouncing ball. You stood up and said that the prime minister of St. Vincent cannot speak for you.”

Thomas continued: “But on Monday, the prime minister said that he knows that his eight will hold. You did not get up then. That’s the point I am making.”

Outside of Parliament, the opposition New Democratic Party had latched on to Caesar’s comments.

At the NDP’s rally in Kingstown on Wednesday, Israel Bruce, the NDP’s candidate against Caesar in South Central Windward, noted the MP’s comments.

At the rally, Member of Parliament for North Leeward, Roland “Patel” Matthews, who is also a member of the NDP, weighed in on Caesar’s comments.

Meanwhile, at the rally, NDP senator and candidate for West St. George, Kay Bacchus-Baptiste, attempted to link Caesar’s comments to the December 2015 general elections, the results of which the NDP is challenging with two petitions.

In Parliament, the Speaker ruled against government lawmakers, saying that the opposition did not need majority support before a motion of no confidence could be debated.

He, however, allowed an amendment to the motion, which turned it into a motion of confidence in the government, which government lawmakers passed in the absence of the opposition, who stayed away for the post-luncheon part of the sitting.

The speaker, however, said on Thursday in a Facebook post that he erred in allowing the amendment to the motion.