Speaker threatens to ‘toss’ deputy out of Parliament 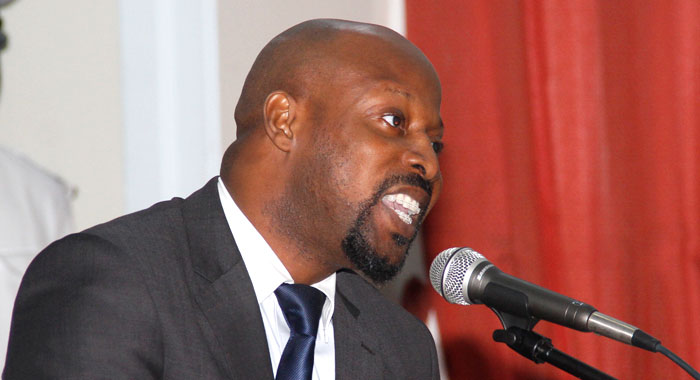 The threat came after James shouted down the speaker during a heated debate over what course of actions the national assembly should take on the motion of no confidence that the opposition had brought against the government.

“I didn’t see you and I saw the honourable senator,” Thomas said as he gave James permission to address the Parliament.

“I’ve been trying to get your attention for quite some time,” James said.

The speaker asked him what he had said, and James repeated his comment, adding, “I’m just acknowledging that. I’m glad that you acknowledge me.”

At this point, opposition lawmaker, St. Clair Leacock, who is Member of Parliament for Central Kingstown, commented to James:

Leacock was apparently referring to what can be interpreted as ongoing tensions between James and Thomas, both of whom were defeated by their opposition New Democratic Party rivals when they ran for the ruling Unity Labour Party in the 2015 general elections.

Thomas has said in his newspaper column that James told him last year that he is a ‘nobody’.

iWitness News understands that James reportedly made the comment after Thomas allegedly told him that he no longer has any respect for him (James).

“This is absolutely nothing personal,” James said.

“Yo’ fresh self,” commented Member of Parliament for North Leeward, Roland “Patel” Matthews, who held on to his North Leeward seat by 12 votes in the face of the challenge by James.

The exchange came as both sides of the house shared their views on whether the speaker should have allowed debate on the motion of no confidence brought by the opposition or the ‘confidence’ motion which was presented and described as an amendment.

“Mr. Speaker, I’m glad that we’ve arrived at a point where you’ve acknowledged that at some point we are guided by the recommendations of the Honourable Prime Minister in having the substantive matter, which is the original issue which was raised this morning be put, by way of a case stated. And now, further–” James was saying when the speaker interrupted him.

“Honourable member, hold on. We have said that before.”

“Yes, but I am raising a point, Mr. Speaker. Are you going to allow me to raise the point?”

“I don’t feel inclined to allow you to raise a point which has already been dealt with. I thought you were rising to make a substantive point,” Thomas responded.

“I am, but if you would allow me to develop the point I am raising,” James said.

He continued: “And, Mr. Speaker, in addition to that, we are back at square one with this particular issue. It has been how many hours we have been sitting here, standing here in this Honourable House trying to get to a point of clarity and it seems, Mr. Speaker, as I said initially, in my earlier position, that you are between a rock and a hard place and we have to resolve this issue by having this matter referred by way of a case stated. I have stated it before and I’m repeating it again. “But, Mr. Speaker, we are at an issue now, as it relates to the motion that is before you, my understanding is that there’s a motion before this House. One motion and an amendment, which was tabled this morning and, Mr. Speaker, you quite rightly ruled and indicated, but I am not sure if you had issued a final ruling on this matter that where there is an amendment to any particular motion that the amendment takes precedent.”

The speaker had earlier ruled against the government’s submission that the opposition needed the support of the majority of the house to allow its motion of no confidence to be debated.

“You are not sure if I ruled on that?” the speaker asked James.

“Well, Mr. Speaker, I am at a loss — I am stating that because I am at a loss as to why we are still in a position of having not yet concluded, or we have not yet made a decision on how we are moving forward collectively,” James said.

“Honourable member, the people’s business is important business. You may think that this is easy and simple. And, quite frankly, it may be easy and simple for you and I credit you for that level of genius.”

The speaker then told the senator, “Please sit.”

James, seemingly annoyed, began to raise his voice and said:

“Mr. Speaker, I am making a point which I think is very important. In fact, this morning, it was I who said that this matter should not be trivialized.”

As the prime minister rose to address the house, the speaker told him, “Speak to the honourable member or I’ll toss him.”

The prime minister, however, did not comment on James’ outburst.

In the end, the speaker ruled to allow debate on the confidence motion.

He, however, said one day later on Facebook that he erred in that decision and should not have allowed the government to amend the opposition’s motion.

11 replies on “Speaker threatens to ‘toss’ deputy out of Parliament”