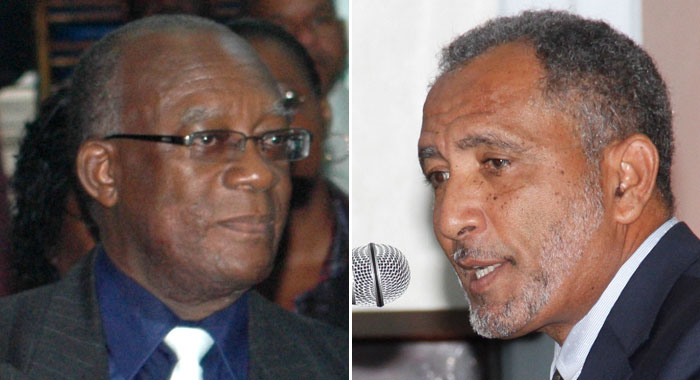 Leader of the Opposition Godwin Friday says he disagrees with the view of prominent lawyer Parnell R. “PR” Campbell that opposition lawmakers should have debated the motion of confidence in the government last week Wednesday, Jan. 31.

“These two motions are opposite sides of the same coin,” Campbell — an estranged member of the New Democratic Party (NDP) — said Monday in his weekly programme, “The Law and You”, broadcast on SVGTV.

Campbell, a queen’s counsel, was commenting on the developments in the national assembly when the opposition was scheduled to debate a motion of no confidence tabled two days earlier.

After House Speaker Jomo Thomas ruled against the government’s claim that the opposition needed majority support to bring the motion, he allowed an amendment that made the motion one of confidence in the government.

Campbell is a former Member of Parliament and Attorney General under the NDP who has maintained his formal membership of the party although his political ties seem to have waned.

“… in my view, there was nothing in either of these motions that both the opposition and the government could not have debated what they came to debate without changing a word, except when it came to the voting,” he said after reading both motions to his viewers.

But Friday, who is also president of the NDP, disagreed with Campbell’s position, telling a party media conference on Wednesday, “Well, you show me in the Constitution where it says that there is a consequence for debating a motion of confidence.”

Friday, who is also a lawyer, noted that Section 47 of the Constitution talks about a motion of no confidence.

“It says if the motion carries there are certain consequences,” the opposition leader said.

Campbell said that he disagrees with the opposition’s claim that what the government produced was a different motion rather than an amendment.

The retired politician cited Standing Order 31(1), which says, “Where any motion is under consideration in the House, or in a committee thereof, an amendment may be proposed to the motion if it is relevant thereto.”

Reading from the 20th edition of Erskine May’s treatise, which is regarded as the Bible on parliamentary proceedings, Campbell said, “The object of an amendment may be either to modify a question in such a way as to increase its acceptability or to present to the house a different proposition as an alternative to the original question.”

During last week’s debate, it became clear that there are some fundamental differences between older and more recent versions of the May treatise, which is now into its 24th edition.

Campbell said that those in the legal system would be quite aware of the concept of an amendment.

Estimates, Budget as no confidence motions

Campbell further said he wanted to introduce into the public discussion a point that he had not heard anyone talk about as yet.

“Do you know that the debate on the Estimates and subsequently the budget debates are in fact two debates of confidence or no confidence in a government?

“Our Constitution makes it a must for the government to come to parliament every year to propose estimates and to propose an [appropriation] bill, which we popularly call the budget.

“So, to bring a no confidence motion on the same day that the Estimates are down for debate is to be duplicating the attacks on the government because when an opposition attacks an Appropriation Bill and the Estimates, it is saying that this government has lost credibility, has lost its majority…”

Constitution explicit about no confidence motions

Meanwhile, Friday told his press briefing that that in some jurisdictions, the Estimates and Budget are interpreted as motions of no confidence in the government and should they fail to secure majority support the government should resign.

“How do you know how it would be interpreted here in St. Vincent and the Grenadines?” he said.

The opposition leader said he does not know of any constitutional provision that would have the effect of forcing a government to quit if it fails to get its Budget approved.

“But the general point is if you can’t spend money then the government can’t really perform. So, if a budget fails, yes, it ties the government’s hands, they can’t go forward with the spending because you have to appropriate monies to spend from the Parliament. If you can’t do so, the government is actually in gridlock.”

He reiterated that the Constitution provides for a motion of no confidence and outlines the consequences of its outcome.

“To tell me that I must give up my constitutional rights because I can do something else, to me, that is insulting too,” Friday said, adding that his actions are in defence of citizens’ rights.

“If you say, ‘Listen, there is no election no more in St. Vincent and the Grenadines’ and you say, ‘Well, you have a choice, you can leave.’ That is true. I can go somewhere else, but that is not a proper answer to a right that is guaranteed in the Constitution…

“If it was intended that this right were not to be taken seriously, they would not have put it in the Constitution. This constitution wasn’t framed back in the dark ages. It’s 1979. We were enlightened then…

“We are not inventing it, we are not rewriting the Constitution. All we are saying, for God’s sakes, respect it. It is there. Don’t say that because we don’t like it we are not going to respect it. You don’t have that choice. If you want to do it, bring a motion, file some amendment or whatever to the constitution, get the two-thirds majority in the parliament in a referendum and repeal the right to bring a motion of no confidence.”

But Campbell was of the view that the motion of no confidence was out of order because it violated   Standing Order 38, which says:

“It shall be out of order to anticipate a bill by discussion upon a motion dealing with the subject matter of that bill.”

“So the motion dealt with the subject matter of the appropriation bill and the estimates and therefore, violated, in my view, Standing Order 38.”

He said a debate of a motion of confidence also would “necessarily entail the sort of attacks by the opposition that they must have prepared when they prepared their presentation on the motion of no confidence.

“So I am saying they should have debated their no confidence motion using the same attacks when they got up to speak on the government amendments.”

8 replies on “Friday disagrees with Campbell”