‘Scientist’ at SVG’s historic marijuana testing is a chef 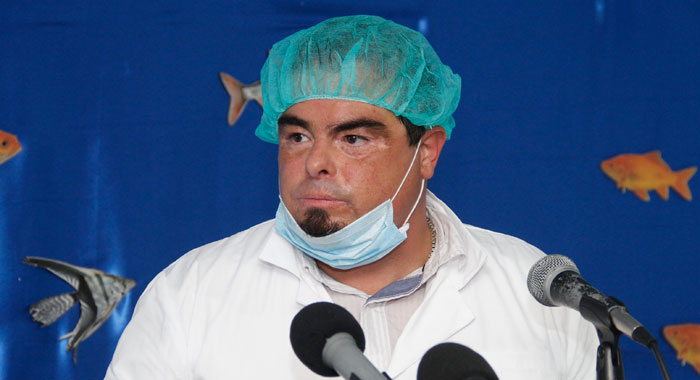 “Marijuana scientist”, chef Frederick Nesbitt III at the marijuana testing event in Kingstown on Thursday. It later emerged that Nesbitt is a chef and deejay. (iWN photo)

Social media has been abuzz since Friday with questions about the credentials of the “scientist” who conducted the historic testing, one day earlier, of samples of marijuana grown in St. Vincent and the Grenadines.

The testing session in Kingstown was overseen by Minister of Agriculture Saboto Caesar, and was attended by acting Commissioner of Police Colin Williams, Executive Director of Invest SVG, Annette Mark, Minister of Finance Camillo Gonsalves, the media, healthcare professionals and marijuana decriminalisation activists.

It came as St. Vincent and the Grenadines pushes ahead with its medical marijuana industry amidst calls for the decriminalisation of small quantities of the plant for recreational use, a step that the Unity Labour Party administration has said it is not prepared to take at this time.

The tests were conducted by U.S. citizen Frederick Nesbitt III, who tested some 10 samples and declared one to be of a higher grade that what is produced in Jamaica.

At the event, director of the Bureau of Standards, Ezra Ledger, introduced Nesbitt as   “a very esteemed scientist”, who is a graduate of the Santiago State University.

Ledger said that Nesbitt is certified in cannabis science and medicine by the University of Vermont Department of Pharmacology.

He said that Nesbitt was accepted into the university’s post PhD medical programme “because of his 27 years of experience in medical cannabis”.

Nesbitt also been involved in the treatment of HIV, cancer and physical ailments by cannabis use, Ledger said.

He said that Nesbitt has a culinary arts degree from California Culinary Arts Academy and incorporates his knowledge of the properties of cannabis into his cooking for high profile athletes and actors.

However, the nation’s prime minister, Ralph Gonsalves was not at the event.

Nesbitt further said: “The opportunity to be able to start an industry with medical marijuana outside of California where I live or the United States where I work in is a tremendous breakthrough and for this community also to have me here. I appreciate being here. Thank you.”

However, Nesbitt’s Facebook and Linkedin profiles describe him as a chef and DJ and list no qualifications in the sciences.

But on Friday, persons began questioning Nesbitt’s credentials after internet searches suggest that he does not have a background in science but is, in fact, a DJ and a chef that incorporates cannabis into his dishes.

Asked on Saturday about Nesbitt’s credentials, Caesar told iWitness News they were as cited by Ledger, as given to him by the investor that brought Nesbitt to SVG

“And that is what I am advised by,” the agriculture minister said.

He told iWitness News that all potential investors in medicinal marijuana in SVG are given a chance to test samples of the plant, after they obtain the requisite government permits.

“A particular investor, which I mentioned was in the room, brought the person that does their testing for them… Another company is coming in, they are brining a researcher from UWI (University of the West Indies) Trinidad and Tobago to test the local strands as well, because investor X will not depend on investor Y’s findings.

“If Kenton Chance wants to invest $20 million in marijuana locally, he’s not going to go on the findings of Saboto Caesar,” the minister said.

He noted that it was not the Unity Labour Party administration that brought Nesbitt to SVG.

“I want to dispel things like, I hear people saying he was paid to come here by the government. No, no, no, no…

“… The particular investor, at their total cost, at zero cost to the government, brought other persons, who proved to them that he has the requisite certificates and experience. That’s a private arrangement between them and Fred. He came, they did the testing and they invited the government. Of course, it was the first investor to do a test in pursuant to us developing a modern medicinal cannabis industry.”

The minister said there are five other persons, including one local, who has already shown interest in testing Vincentian marijuana.

“And a similar thing will take place when all the other persons come. So last (Friday) night when I saw the thing on social media, I chose not to respond and I really want to tell you thanks for calling and not just joining the bandwagon.

“And I won’t disrespect and say it’s a bandwagon because any information that goes into the public domain, it is the right of anybody to critique it. But I just want to make it clear that it is a private arrangement between the persons doing the testing and a private sector investor who came into the island.”

At the testing, Ledger said that Nesbitt was using the thin layer chromatography method to test the marijuana.

“It’s a portable equipment that is useful, but many times these analyses are done in high-tech labs using a GC or HPLC machine in a controlled environment.

“So, naturally, what we have is an indication and a baseline figure, we will validate these results once our industry has established itself,” Ledger said.

The minister told iWitness News that the other persons who are lined up to do the testing would probably use similar or different modalities.

“And I want to dispense with the notion that the government had anything to do in terms of spending money to bring anybody in to test. In fact, we have stated from the beginning that professor O’Garro from the University of the West Indies who is a Vincentian, we have already spoken to him for him to do work.”

He said that the government would have to get it to the stage where they can do some work between SVG and the UWI as it pertains to tying down the arrangement.

“But we are not at that stage yet. But what we want to do, full transparency and accountability, anyone who comes into the country to do anything, it is done in full openness. And that is why Akers, the company that came, invited us and we invited the media. You notice everything was available for full viewing of everybody.”