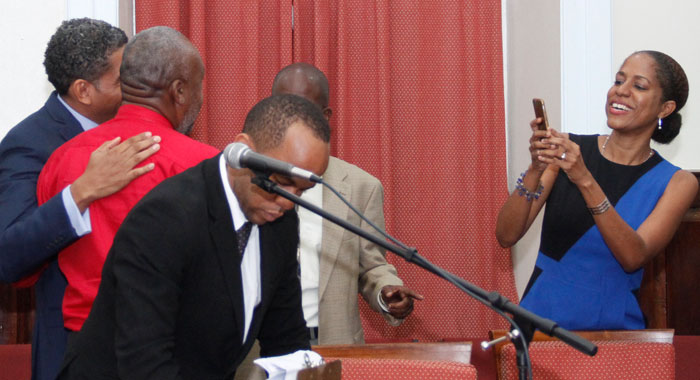 Minister of Finance, Camillo Gonsalves, left, poses with a constituent as his wife, acting FSA Director Karen Duncan-Gonsalves, takes a picture of them after his Budget Address last Monday. (iWN photo)

Speaking on Boom FM on Friday, the prime minister, who is the finance minister’s father and the father-in-law of Duncan-Gonsalves, a Senior Crown Counsel, says she has been a member of the board of directors of the FSA for three years.

Gonsalves said that before relocating to St. Vincent and the Grenadines, Duncan-Gonsalves, who is originally from Jamaica, was “a hotshot, rising young lawyer in a big law firm then went to work with the Jamaican Fair Trading Commission dealing with a lot of compliance issues”.

The FSA is responsible for the regulation of the non-bank financial sector in SVG and its previous director, Sharda Bollers demitted office on Jan. 31.

“She has some things of a personal family nature which she wants to deal with and which would take her some time,” the prime minister said in his appearance on  Boom FM.

The board of the FSA — led by Leon Snagg, a former director of audit and permanent secretary — put out an advertisement for the top job and has received more than 15 applications, including from three persons within the FSA, the prime minister said.

“So the board, in its wisdom, took the decision that they would appoint somebody to act not by any of the three inside who applied,” the prime minister said.

He said the FSA board decided not to appoint any of its current staff who had applied because they didn’t want to raise anyone’s expectation.

The law allows the FSA to select someone from its board of directors to act as executive director, and Duncan-Gonsalves was not the first choice, the prime minister said.

The board can appoint someone to act for up to 90 days without seeking the approval of the minister of finance.

“The person on the board whom originally they were asking was Stuart Haynes. But that was only a fleeting thing because Stuart is running a 500 million dollar establishment at NIS (National Insurance Services),” the prime minister said.

“He can’t be away from it for two days much less for two months, or three months.”

When Duncan-Gonsalves was asked, she declined, the prime minister said.

“She said, ‘I am not interested.’ They begged her, they pleaded with her. She said, ‘Ok.’ She said, ‘Well you’ll have to select a successor in a shorter time than three months.’ A successor to Mrs. Bollers. So they said, ‘Ok, in two months?’

And she says, ‘I will hope that you can get it done even before the expiration of two months’,” Gonsalves said.

The prime minister said that his daughter-in-law told the FSA board that she wants to stay as senior crown counsel and do general law.

“And you know, it is really something to see a woman who has done nothing wrong, this is the country of her adoption through marriage and she is beaten up by the opposition and by the internet crazies for responding to national service. They begged her. In fact, there are people who had encouraged her to apply for the job substantively. She said no.

“So where she is, she is hoping they could finish the appointment and when they are having a permanent appointment, they have to get the approval of the minister.”

The prime minister said that Duncan-Gonsalves has not applied for the permanent job.

Why a reluctant chief?

Last Wednesday, Leader of the Opposition Godwin Friday, responding to a question at a press conference said that when he learnt that Duncan-Gonsalves was functioning as head of the FSA, he observed that the position falls under the Ministry of Finance, which her husband heads.

“It’s a bit odd to have the Minister of Finance as the responsible minister and at the FSA, his wife is functioning as the head of an authority under that ministry. It may be legally permissible but it smacks of an accountability problem…

“You have to have proper systems of accountability and the appearance must be always evident,” Friday said.

The opposition leader said that another question is that of nepotism.

“The question is asked, why is it that others who have applied and who are qualified have not been offered the position. It is legitimate for those questions to be asked. If you could provide a proper answer to it, then so be it. What I heard from the prime minister in his defence … was that Mrs. Duncan Gonsalves didn’t want the position but somehow they forced her to take it.

“I don’t think that that washes. Why would you have a head of such an important authority who is a reluctant chief? So you need to ask for a clarification of that as well. When there are other persons who want the position, why would you ask somebody who doesn’t want it to take it. So, if it is disingenuous, it means that people have a right to ask questions,” Friday said.

Duncan-Gonsalves, who has been living and working in St. Vincent and the Grenadines has been the focus of public attention since early January when former model Yugge Farrell allegedly went to her office and called her “a dirty b***h”.

Farrell, who was charged with using abusive language to Duncan-Gonsalves, spent most of January in a psychiatric hospital after being charged.

She has since alleged that she had a years-long relationship with the finance minister during his marriage to Duncan-Gonsalves.

The finance minister has remained mum while his father has been doing all of the talking about the scandal.