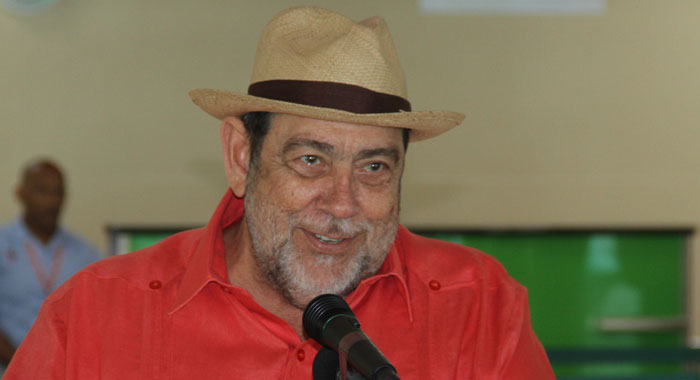 Prime Minister Ralph Gonsalves says that persons who write cynically about Argyle International Airport should stroke their breast and say “mea culpa” whenever they use the facility.

His comment came Wednesday at an event to commission a chandelier to mark the one-year anniversary of the opening of the airport.

“I know there are people who write about this airport in a cynical manner,” he said, adding that the original cynic in ancient Greece was not hypocritical because he lived in a barrel.

“But the same ones who are cynical about this, you think they does tek (take) speedboat and go Carriacou? Eh? You think that is what they does do?

“They come here and some of them, they have such bad mind, they push up they face, they wuk up they mouth. I ask them please, at the end of the first anniversary, it is here, it not going anywhere, just cool out, relax and stay within the frame of almighty God,” the prime minister said.

He said the airport, which opened on Feb. 14, 2017 after a six-year delay, “is a metaphor for what a determined and united and creative people could accomplish against immense odds”.

Gonsalves said that the EC$700 million airport was built with tremendous love and is unique in the Caribbean.

“First of all, it is the only airport which has not received the imprimatur of any engineer, any technical person from America, Canada or Europe — the only airport in the entire Caribbean,” he said.

He said he knew the risk involved when the airport was started, saying that if he had been unable to complete it he would not be prime minister today.

“I would’ve been pilloried. I might’ve had to go and see if I can get a spot on Balliceaux,” he said, referring to an uninhabited and inhospitable island in the Grenadines to which indigenous Vincentians were taken 200 years ago before being sent into exile.

“As long as we can read and write and record things, what we have accomplished here will be in the memory of our people and of our Caribbean civilisation.”

He spoke of metaphors woven into the design of the airport, including the green counter tops, mahogany facade in the ceiling, and the stone work.

“So this is not just made like that. Thought went into it… This is not a piece of concrete simpliciter. It has life and meaning for all of us,” Gonsalves said.