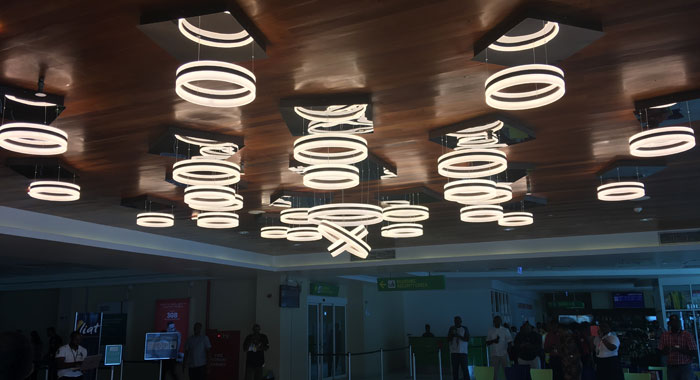 The chandelier that was turned on on Wednesday in celebration of the one-year anniversary of the opening of the Argyle International Airport was inspired by a quote by Prime Minister Ralph Gonsalves.

Trinidadian Carlos Leon Manickchand, speaking at the lighting up event, said that the inspiration came from the speech in which Gonsalves said, “Never allow any people or nation to impose upon us limitations to our imagination.”

Manickchand has Vincentian roots in that his mother, Rae Claudette Mitchell is the daughter of “Papa Mitchy”, the uncle of former Prime Minister Sir James Mitchell.

Speaking at the event, Manickchand said that 50 years ago, he was a very hyperactive little boy playing on the beach in Bequia, where his uncle, “Mac”’, would be sent out to look after him.

Manickchand grew up to be a pilot and flew a plane into Bequia, to visit his uncle who found that it was so cool and wanted to learn to fly and did.

“And uncle Mac learned to fly and his first flight out of E.T. Joshua, he didn’t make it,” Leon said.

He said he was in St. Vincent on this trip because of his son who lives in London told him a year ago that St. Vincent has a new airport and they can visit again.

Manickchand said that he did some research and saw “this magnificent airport.

“As a pilot, it has this lovely approach, we don’t pass over any houses, clear departure, no hills, no obstructions, beautiful, modern building. And I’m thinking to myself, did they find oil in St. Vincent, where did they get this from,” Manickchand said.

He said that the chandelier that has been installed in the departure check-in area “is the imagination of that little boy”, a reference to himself growing up in Bequia.

“This is a message to all the children of St. Vincent, of the Grenadines to free what is in their minds, to excel. This is a message, a very simple message: the outer rings are us, at birth and as we go in, we grow, we multiply and then we become that centre bit, which I‘ll leave to your personal interpretation,” he said of the chandelier.

“What are we really? Am I Indian? Are we from Africa? No, we are mixed. We are members of the Caribbean. We are loved by Trinidadians. We have differences but we agree to disagree. That is what this light is about. When we leave and we are passing through our departure hall and we look up at that bit, we remember we are all the same, we are all free to interpret ourselves as we feel. The name, Vincy love, coincidentally is kind of matching to last year’s slogan love in the air, or something like that. That love is love of who we are, love of country, love of our neighbours, that is what this light represents or what I meant it to represent,” Manickchand said.

The chandelier was funded by a group of aviation enthusiasts, based in London and San Francisco with family ties in St. Vincent and the Grenadines.

The chandelier serves as an anniversary gift to AIA and is dubbed, ‘Vinci Love’.

Manickchand and Ian Brown of CALM5/Superior LED, representing the sponsors, arrived in St. Vincent on Feb. 9 to assemble the “Vinci Love” chandelier, in collaboration with AIA’s electrical engineering team.

3 replies on “‘Vinci Love’ chandelier turned on at AIA (+video)”