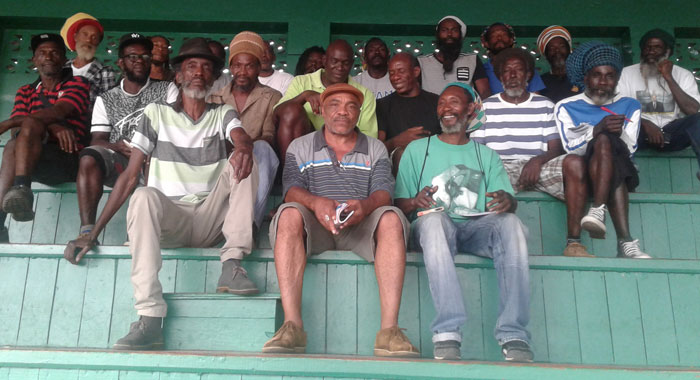 Persons at the St. Vincent and the Grenadines Cannabis Revival Committee meeting. Cottle is at front left.

More than 25 persons representing cannabis growers and consumers from several communities throughout St. Vincent and the Grenadines met at Victoria Park on Monday to discuss government’s announcement to legalise medical cannabis.

The meeting, which was called by the St. Vincent and the Grenadines Cannabis Revival Committee (SVGCRC) was presided over by Junior Spirit Cottle, who is also the committee’s president and Vice President Ajit Duncan.

The meeting looked at the restructuring of the organisation to enable it to operate more effectively.

The SVGCRC has been calling for alternative livelihood for growers, medical cannabis and decriminalisation, as well as the legal right of Rastas to use cannabis as a religious sacrament.

“In the fight for the reform of cannabis laws, concessions are more often given to consumers of the plants rather than the producers, who have little or no other form of livelihood, and who see their crops often eradicated,” Cottle said in a press statement.

He said the SVGCRC supports the move to legalise medical cannabis as it continues to call for the decriminalisation and the religious freedom of marijuana as a sacrament.

“The CRC views medical cannabis as a stepping stone to our other objectives,” Cottle said.

“To this end, we call on the ULP (Unity Labour Party) government to ensure that our traditional farmers become an integral part of the process, that the new law reflects the interest of the growers; and that our country and people become the principal benefactors of any such industry to be established.

“We also call on the opposition New Democratic Party (NDP) to support us on our way forward.

The following persons were elected as executive members to fill some vacancies: