Vincentian removed as director of regional farmers’ group amidst controversy 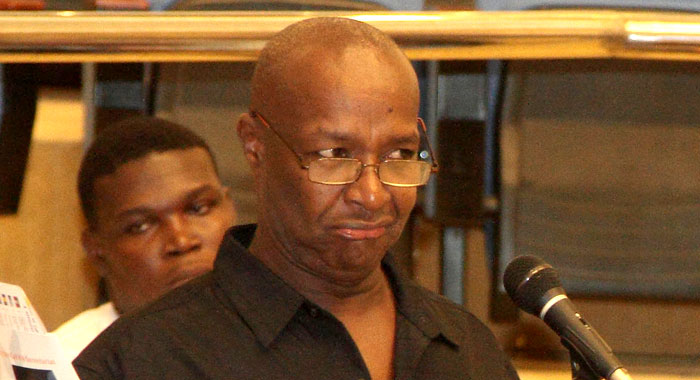 Vincentian Jethro Greene has been removed as Chief Co-ordinator of CaFAN.

Vincentian Jethro Greene is denying that he was fired as chief co-ordinator of a regional farmers’ network amidst questions about his stewardship and that of his three fellow directors.

According to the Jamaica Gleaner newspaper, Greene was stripped of his post with the Caribbean Farmers Network (CaFAN) at a hastily arranged meeting in Barbados on Feb. 10.

“I cannot be forced out of any organisation because it is a voluntary effort,” Greene, however, told iWitness News on Wednesday.

“Nobody is elected. We took over the running of CaFAN at our expense and when it became too much, we just decided to drop it,” he said.

CaFAN was formed in 2004 as a regional network of farmers’ associations and non-governmental organisations in the Caribbean, its website said.

It was registered in St. Vincent

CaFAN’s major focus is to foster linkages, training and information sharing amongst Caribbean farmers so that they are in a better position to respond to the key challenges facing the agricultural sector in the Caribbean.

CaFAN was registered in St. Vincent and the Grenadines on Feb. 12, 2009 with the Eastern Caribbean Trading Agriculture and Development Organisation (ECTAD) as one of the founding members and Greene as the incorporator.

Notwithstanding Greene’s departure from CaFAN, disgruntled members are not satisfied and are calling for the en bloc resignation of all directors.

The other directors are CaFAN’s president, Jamaican Norman Grant, James Paul, a Member of the Barbados Parliament, and Dhano Sookoo of Trinidad and Tobago.

However, only the four directors participated in the meeting in Barbados.

The Jamaica Gleaner has reported that the countries still committed to seeing the backs of the current board members are Antigua and Barbuda, The Bahamas, Dominica, Guyana, Jamaica, Montserrat, St Lucia, St Kitts and Nevis, St Vincent and the Grenadines, and Suriname.

“We regard their actions as disrespectful, shameful, and an example of extremely bad governance practices,” the newspaper quoted an unidentified representative as saying of the directors.

But Greene maintained to iWitness News on Wednesday that his departure from CaFAN was voluntary and not because of any pressure brought on by members.

“We have deregistered CaFAN in St. Vincent. It is no longer a legal entity not only because of the infighting but because it was not required for us to spend thousands of dollars keeping a non-profit network which shares information together.

“And there are a lot of factions fighting within the countries, different factions and our decision is that it is a voluntary organisation, people are claiming it saying it belongs to them. That’s their problem.”

Greene told iWitness News that he was sending out a notice to tell people that he is no longer associated with CaFAN and that it is not under his jurisdiction.

“I am putting more emphasis on what you call the ECTAD Caribbean link rather than dealing with an entity full of confusion.”

iWitness News understands that the Barbados meeting was called amidst allegations of misappropriation of funds.

“The fact is that all funding that I sign off with donor agencies, everything has been closed,” Greene told iWitness News, denying that there funds missing from the organisation.

Greene did not attend the meeting, but participated via Skype.

He shared with iWitness News a “Chief Coordinator Report” dated Feb. 8, 2017, which he said he delivered to the meeting.

Under “Project Funding”, the report said that donors dictate the use of project funding.

“All original receipts for the expenditure of donor funding are collected by the donor who determines what will be reimbursable. Any discrepancy, which becomes a disallowed expenditure, therefore becomes the liability of ECTAD — and not CaFAN.

“We have had several instances of this in which ECTAD has had to absorb costs refused by donor.

Donors do not pay for rent, administration, utilities and other overhead costs. To cover these expenses over the years, ECTAD has solicited private donations. Donations received were not often adequate to cover overall costs. Some of these private donations received, though inadequate at times, were given to countries in times of disasters,” the report says.

The report further says “we in SVG spend over 2.5 million dollars of our own registering and coordinating the CaFAN NETWORK over the last 15 years,” adding that CaFAN has no financial members.

It says that CaFAN has no elected officials and is a virtual and facilitating network not registered.

“At the moment the basic function of CaFAN information sharing is always ongoing and this does not require expenses of a legal structure that no one is willing to pay for,” Greene’s report said.

He told iWitness News there is a faction from Trinidad that wants to register CAFAN there while factions in Antigua and the Bahamas also want to register the network in their jurisdictions.

“So what I did, I joined the meeting by Skype, the same report I’m sending to you, I gave them the same report and I told them as far as I am concerned, because of my change in focus and because of the situation that’s going on, I really think that right now we should part company.

Greene told iWitness News that he is aware that some members of CaFAN are calling for its entire leadership to demit office.

“One faction has written and said they have elected their own body. There is another faction that is in Trinidad who says they are registering the organisation. And right now, those of us like James Paul we just came out of the bacchanal, because there is nothing. It is a network for sharing information.”

Greene told iWitness News that the goings-on will have some temporary negative impact on CaFAN.

“But the point about it is that those of us who are sticking together are people who are focused on farmers. We are focused on farmers. Most people have spent their time travelling with development tourism travelling the world giving speeches. And what I have been pushing for is the organisation that we need to focus on accessing profitable markets. And that’s what I’m trying to push in St. Vincent.”

He said he has already made very strong headway in Europe linking up markets.

“But nobody is producing to supply them. So we are doing that from St. Vincent and that’s what we are going to do from several countries –focus on the market.”

Greene maintains that he has done nothing wrong.

“As far as I am concerned, the mission of the organisation has not been achieved,” Greene told iWitness News.