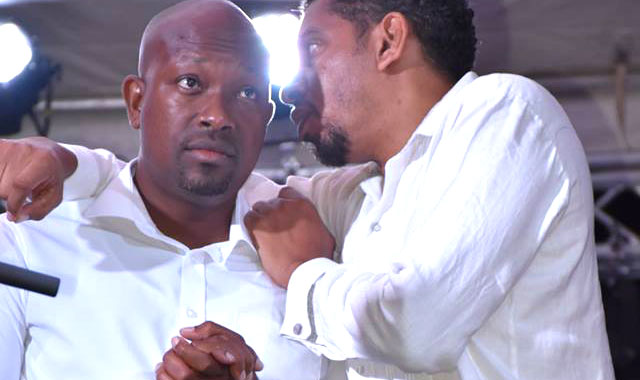 Minister of Agriculture, Saboto Caesar was once a shining star of the ruling Unity Labour Party. He was once seen as well-positioned to succeed Papa as leader of the ULP. So convinced was Saboto that he was heir apparent, that in 2010, he even began to speak like Papa, and even adopted some of Papa’s mannerisms. Papa fuelled this belief by suggesting that Saboto was a son in whom he was well pleased. But that was before Camillo, Papa’s “begotten son”, returned to St. Vincent around 2012.

Then in 2013, Camillo was made Minister of Foreign Affairs, allowing him to rub shoulders at a higher level with contacts made while he was at the United Nations. During Camillo’s stint at the UN, Saboto was happy in being called “Mr. Minister”, a position way lower that of “Your Excellency” — the title given to a diplomat. Then things began to change for Saboto when he was moved from the Ministry of Tourism to the Ministry of Agriculture, which was in a dismal state. The banana industry had been taken off life support by the failure to spray against Black Sigatoka when banana cultivation was just rebounding from Hurricane Tomas in 2010. That is when Saboto was sent to take over the Ministry of Agriculture. Was this an accident or was it part of a plan to ensure that the real “son in whom I am well pleased” would appear to shine brighter? We can ask this because Saboto’s candle was snuffed out. Then the real “son in which I am well pleased” was made Minister of Economic Planning.

If Saboto or the nation as a whole had any doubt before, both would have realised where things were heading. Economic Planning is one step away from Finance and it was no surprise that the son in whom I am well pleased was made Minister of Finance last November. Saboto, certainly, you know that Minister of Finance is one step away from Prime Minister? Who was elevated over you to become Minister of Finance, Saboto? Do you have any doubt who would become prime minister ahead of you? Have you noticed who announced the ban on the killing of turtles? Lest you have forgotten, it was the Prime Minister. But turtles fall under your ministry, not so? Who announced the increase in the minimum wage? Camillo! Labour falls under Camillo’s ministry.

What about the fiasco with the marijuana testing a few weeks ago? The so-called scientist turned out to be a chef. Was any due diligence done? Was this allowed to happen to erase confidence in Saboto on a major policy point in the country? Well, at least Vincentians can understand why their government doesn’t want to pursue formally a citizenship by investment programme. If you can’t tell a chef from a scientist, how can you expect to separate legitimate investors from scamps? Well, they’ve already proved that they can’t do that. Remember Dave Ames? Remember the Venezuelan man down Ottley Hall marina who wasn’t paying his workers? Where is he now?

Saboto, if you have any doubt about the extent to which you are being pushed into the background, just look at the way you were treated at Argyle. You spoke so close to the beginning — after Luke — who spoke after public servants. Who remembers what you said? What we remember is that the Prime Minister arrived during your speech. Do you think this was accidental? Can you not see the orchestrated effort within your own party to upstage you? If you have any doubt about who Ralph meant when he spoke about the son in whom he is well pleased, just listen to Papa’s reference to Jesus Christ on Saturday. Maybe you should really take Sir James’ advice, which Papa claimed was given to you.