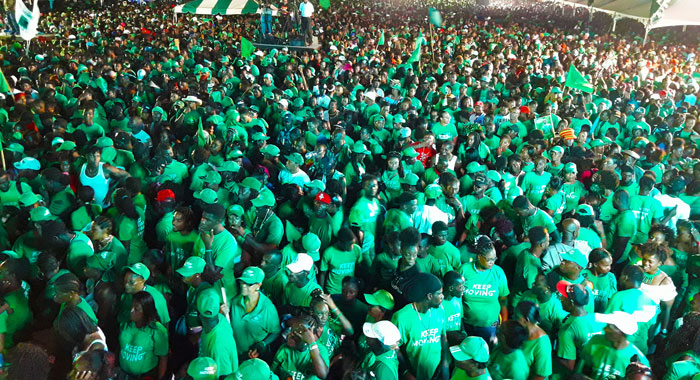 New National Party supporters at one of their election rallies. (Internet photo)

Leader of the Opposition New Democratic Party in St. Vincent and the Grenadines, Godwin Friday has congratulated Keith Mitchell and his New National Party (NNP) on their election victory in Grenada on Tuesday.

“The New Democratic Party extends heartfelt congratulations to our sister party, the New National Party of Grenada, on securing a momentous second-term electoral victory on 13 March 2018,” the party said in a statement on Thursday.

“The Dr. Keith Mitchell led NNP secured an historic victory, winning all 15 seats for the second time in a row, a feat never before achieved by any government in this hemisphere,” the NDP said.

It was the third time that the NNP was winning all of the seats in the Grenadian parliament, having done so also in 1999 and 2013.

“President of the NDP, Dr. the Hon. Godwin Friday said that he had sent personal congratulations to Dr. the Hon. Keith Mitchell, after receiving the news of the NNP’s ‘overwhelming’ victory,” the NDP said.

The NDP quoted its leader as saying that the results show that the people of Grenada have placed confidence, not only in the promises but also in the performance of Mitchell and his government.

“We wish Dr. Mitchell and his Government continued success in delivering for the people of Grenada,” the NDP said.

One reply on “NDP congratulates Grenada’s NNP on ‘overwhelming’ victory”