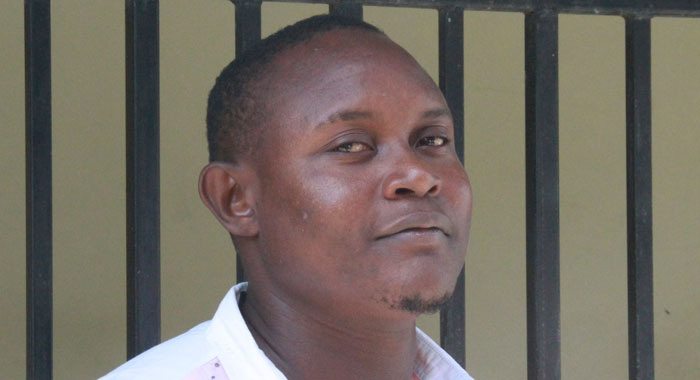 The accused, Akeino Gurley outside the Serious Offences Court on Thursday. (iWN photo)

A Stubbs man was granted EC$9,000 bail and ordered to report to police once per week when he was arraigned on Thursday on three charges, including attempted abduction of a teacher.

Akeino Gurley, also known as Keino, a 26-year-old bartender of Stubbs, was not required to plead to the indictable charges when he appeared before Chief Magistrate Rechanne Browne-Matthias at the Serious Offences Court in Kingstown.

In addition to the attempted abduction at Rawacou of 38-year-old teacher Shanda Bibby of Belmont, Gurley was charged that he robbed Bibby of one black and silver Samsung Galaxy S6 cellular phone valued EC$2,800 and at the time of doing so and in order to do so, used force.

He was also charged that he assaulted Bibby by “squeezing her left shoulder, neck and hand”, resulting in actual bodily harm.

The alleged crimes were reportedly committed at Rawacou on March 9 about 3:25 p.m.

Senior Prosecutor Adolphus Delplesche did not object to the man’s bail.

He, however, told the court that should bail be considered, the Crown would ask that the accused man provide sufficient surety, have no contact with the virtual complainant, report to police at least once per week and surrender his travel documents.

The chief magistrate ordered the accused man to provide one surety, report to the Stubbs Police Station on Mondays between 6 a.m. and 6 p.m., have no contact with Bibby, surrender his travel documents, and that stop orders be placed at ports of exit and entry, preventing him from leaving the state.

The man was also ordered to seek the permission of the court to leave the country.

He will return to court on June 6 for a preliminary inquiry.

4 replies on “Man charged with attempted abduction of teacher”