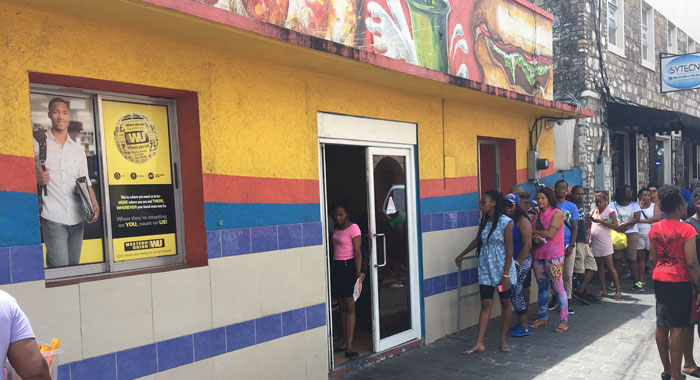 Persons queue up outside Western Union in Kingstown on Saturday. (iWN photo)

A number of persons who depend on remittances have questioned the policy requiring them to now present two pieces of national identification to collect monies sent to them from abroad.

The policy has left some persons shopping around in their families for members who might have a driver’s licences or a passport to use along with their national identity cards to receive remittances.

The National Insurance Services card, which is issued to persons older than 16 who register, does not have a photo and, therefore, cannot be used for identification purposes.

One South Leeward family recently told iWitness News that they had to wait for days to collect monies from a local money transfer agency.

The wait was occasioned because the recipient had to ask the sender to ask the money transfer agency to change the name of the recipient to that of their sole household member who happens to have a driver’s licence: a retired man.

“It’s not so much the Government of St. Vincent and the Grenadines. It is the international standard which has been set and what I understand has been happening is that the agencies, the money services entities, they have been using their discretion so that somebody comes in and they have only their passport or they may not have their passport, they may have their identification, and it is somebody who they have a history of dealing with, they continue to deal with them.”

The prime minister, speaking at the press conference last Monday, March 12, did not say how it is that the policy allows for discretion regarding who can collect money with only one piece of national identification.

He, however, said that a money transfer agency may ask a new customer who only has one piece of identification to get someone “to vouch for them.

“It is a kind of know your customer situation,” he said.

But the South Leeward family was forced to have the name of the recipient changed although they have been receiving for years small amounts of cash from their relatives in North America via the money transfer agency.

Hans King, press secretary to the prime minister, said at the press conference that he thinks that the Financial Services Authority (FSA), which regulates non-commercial bank financial institutions in SVG, issued a statement some time ago about the need for two pieces of identification.

It seems to be the practice of the FSA to have a select few media entities through which to publish their press releases as paid content and not send them to other media outlets, such as iWitness News, which has offered to disseminate the information without charge, or as paid content, as the FSA sees fit.

iWitness News also did not find on the FSA’s website any statement about the need for two pieces of national identification to collect remittances.

Gonsalves said when the policy was introduced “it created some difficulties because there was no warning and apparently, originally, there was no flexibility.

“But, apparently, from how I understand it has operated, if John Browne has been somebody who has been dealing with the money services agency, they would have them in the system and they know they have been dealing with them for some time and there is no problem and all they have is the identification card, they will still deal with them. If it is a new person who is coming, they will request and say bring a second piece of ID for me or some kind of documentation,” the prime minister said.

Meanwhile, King also said that agencies in the United States tell the sender that the person who is receiving the money must have two pieces of ID.