Otto, Jomo not going to ‘Papa’ over court payment 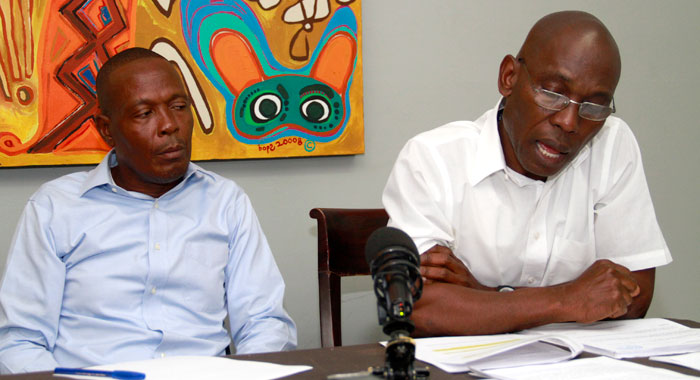 Dismissed public servant Otto Sam says he would “absolutely not” go to “Papa” in an effort to get the Unity Labour Party administration to honour a court order to compensate him for wrongful transfer and subsequent dismissal from the public service.

A few years ago, Prime Minister Ralph Gonsalves, said that persons could take matters to whatever courts they want, but when they are done, they have to come back to “Papa” — a reference to himself.

Sam goes back to court tomorrow (Thursday) for assessment of damages in relation to his May 2013 dismissal, even as the government is yet to honour the 2015 court order that he be compensated in relation to his 2010 transfer to the National Emergency Management Organisation.

Asked on Monday at a press conference called by his chambers if he is prepared to go to “Papa” in an effort to get the government to make the payment, Jomo Thomas, one of Sam’s lawyers, said:

“This is a country with the rule of law.”

“If it is,” interjected Sherlan “Zita” Barnwell, a partner in the law firm and an opposition senator.

Thomas said that in a court where there is rule of law, the law trumps the likings or opinions of any individual.

“As counsel for Mr. Sam, I would be willing to speak to whoever has authority and holds the purse string. But certainly, I don’t think that once the court has pronounced in as decisive a manner in which the court pronounced in both the transfer case and the dismissal case, I don’t think anyone, either attorneys or Mr. Sam should have to speak with anyone except the attorney general in bringing this matter to an end.”

He said that in the early stages of the matter being before the court, he repeatedly said that the law does not support the manner in Sam was transferred.

“… because it was not a lateral transfer and that is what we said and the court found that not to be the case, that the transfer was not lateral and certainly the dismissal was just punitive and had nothing to do with any transgression which had been made.

“… I am a lawyer, I fight cases and I am always excited when I win and this was a decisive victory for Mr. Sam and the law in St. Vincent and the Grenadines,” Thomas said.

Meanwhile, speaking at the same press conference, Sam said he has “absolutely not” considered going to the proverbial Papa in an effort to have the state honour the court rulings.

“In fact, there were times when the state, in all of their game playing and their manoeuverings sought settlement and we have always agreed that the court must speak. Allow God to have his hand in this and let the court to speak clearly. And that is what has happened.”

“No government in a civilized society would want to do that. So it is instructive, at least, that the Minister of Finance and or the chairman of Cabinet should demand that the Attorney General make haste in fully addressing the matter. But, in terms of going to individuals, we don’t know how to do that,” Sam said.

12 replies on “Otto, Jomo not going to ‘Papa’ over court payment”