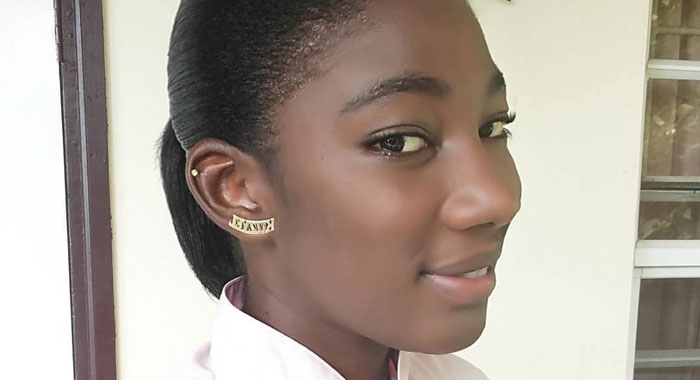 Kizzyel Antoine had always thought that if she were victim of a robbery, she would fight off her assailant.

However, when two men came out of some bushes at Prospect around 9:30 p.m. Saturday and told she and her co-worker, “Give us everything!”, she felt no other impulse but to hand over her handbag and all its contents.

“I did not do anything. I did as they said. I did not even scream, knowing that there is a gun in your face. You can’t even brother to scream knowing that you don’t know if these guys are going to shoot you for no reason,” she told iWitness News.

Antoine, a chef at Hotel Alexandrina and her co-worker, bartender Kenrick Hazell, both of Lowmans Hill, said they were awaiting transportation to Kingstown when the robbery occurred.

Antoine told iWitness News that they were standing near Gitts Supermarket for about 15 minutes when two men came out of some bushes and robbed them.

She said that at first, as they heard the crackling sounds, they thought it funny that the men were coming out of the bushes.

She said that when the assailants came out of the bushes, they were masked and had guns.

“They came to us and said, ‘Give us everything!’ So when we noticed the guns, we just handed our bags over.

“They took the bags and then one of them scuffled me and he was like, ‘Ah say, give me everything!’ I said, ‘Everything is in the bag.’ And he just took the stuff he went back in the same direction they came from.”

She said her handbag contained items for her daughter and her purse with all her bank cards, driver’s licences, etc.

Antoine’s purse also contained EC$250 in cash and some US currency while her co-worker’s bag contained EC$500 and US$100 in cash, in addition to his laptop and a computer hard drive.

After the robbery, Antoine and Hazell were at the spot where they were robbed for about two minutes before a van came.

She said the driver wanted to pursue the robbers but the conductor persuaded him not to, noting the potential danger in doing so.

Antoine said she and her co-worker reported the crime to the Calliaqua Police Station.

None of their possessions have been recovered so far.

She told iWitness News that the experience was “rather horrifying”.

“But I was more angry than actually frightened because knowing you just came from work at that hour and there are people willing to stick you up and take what you have.”

She said the areas where the robbery occurred was not “that bright” but there is a streetlight a little distance away.