‘Just give us the track,’ says SVG’s CARIFTA team coach 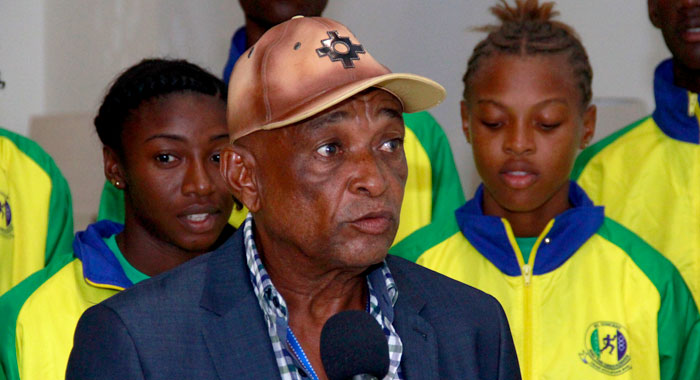 Coach Michael “Mercy” Ollivierre says he will no longer call for a synthetic track. (iWN photo)

The coach of the Vincentian athletics team that participated in the 2018 CARIFTA games last weekend says he is fed up of talking about the need for a synthetic track St. Vincent and the Grenadines.

“I don’t want to talk about the track because every time I do that, I get headache, so I will leave that right there,” Rawlson Morgan told a welcome reception for the athletes, hosted by Tourism Minister Cecil “Ces” McKie at Argyle International Airport on Tuesday.

“I am saying to the government, you don’t have to provide a stadium for us, just give us the track. That’s all we want,” he told the event at which McKie acknowledged that the national athletes could perform better if they have the benefit of a synthetic track.

McKie was elected as a Member of Parliament on a Unity Labour Party ticket in 2010, nine years after the party came to office, promising, among other things, a national stadium — a plan it has since said it has shelved.

Currently, Vincentian track and field athletes train on a grass surface but compete overseas on synthetic tracks, which some coaches and commentators say put the athletes at a disadvantage.

“The stadium, or whatever else could come after,” Morgan said.

“And when you look at these athletes compete on the track over the weekend, you could imagine and understand the plight that we have here in St. Vincent,” he said of the team, which won two gold medals at the track and field meet in The Bahamas.

At Tuesday’s event, coach Michael “Mercy” Ollivierre, who is also vice-president of Team Athletics, also spoke about the importance of a synthetic track to the national athletic programme.

He said that he was sure that the performance of the athletes has reverberated across the county.

“All the kids here have made their communities and their respective schools very, very proud,” he said.

“However, you may have noticed or heard over the past years we have been hearing clarion calls for the establishment of a national — well they say stadium but I am saying a track.

“We have had calls from [Coach] Pamenos [Ballantyne] and everybody has been calling for the stadium. I don’t think we need to call anymore. The performance of these athletes is an indication that we need it,” said Ollivierre.

He made clear what would be his stance on making further calls for a synthetic track.

“I will not be calling anymore and I would be a very dissatisfied coach, like the others, if within maybe a year or two we don’t have a track. We need it now and I am strongly saying let us make these people feel proud, respected and let us get on with a track.”

Ollivierre congratulated the athletes, their coaches and the manager of the team for their performance.

“I know all the kids here have made a tremendous sacrifice and their performance has really stimulated us to be even more positive,” he said.

He, however, singled out Bequia resident Tamara Woodley who has to rush to the ferry berth after her training in Kingstown to ensure that she gets the ferry home to her northern Grenadine island.

Speaking at Tuesday’s event, Wayne Williams, vice-president of the National Olympic Committee, congratulated the members of the team, telling them, “You are worthy ambassadors.

“We, at the Olympic Committee, will continue to support you, we will continue to support our athletes, our coaches, and our administrators. I know that all of you did not win medals but I see some extremely young faces in the group and I know that the experience will do you well and we can expect great things from you in the future,” Williams said.

5 replies on “‘Just give us the track,’ says SVG’s CARIFTA team coach”