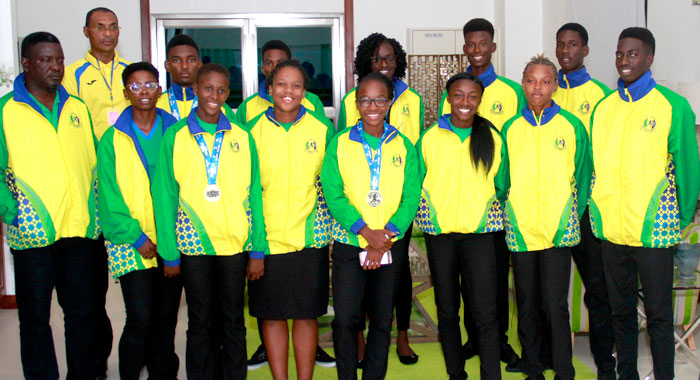 Some members of the CARIFTA team and team administrators at Argyle International Airport on Tuesday. (iWN photo)

Most of the athletes who represented St. Vincent and the Grenadines in the 2018 CARIFTA Games over the Easter holidays returned home on Tuesday exhausted but pleased with their performance.

SVG won gold in three events, including its first gold in swimming, when Alexander “Alex” Joachim netted gold in the Junior CARIFTA Under-17 male 200-metre breaststroke in Jamaica.

He matched his sister, Shné Joachim, by winning 3 medals in a single CARIFTA Games. However, the older sibling never won a gold.

Alex is a student at Appleby College, a high school in Oakville, Ontario, Canada. He swims for Oakville Aquatic Club in Canada and Black Sands in SVG.

Meanwhile, in the Junior CARIFTA track and field championships in the Bahamas, SVG also won gold in the Under-17 male 800-metre.

He beat J’Voughnn Blake of Jamaica into second place (1 minute 57.64) with fellow Jamaican Giovouni Henry placing third in a time of 1 minute 58.32s.

They were, however, awarded the gold medal after the teams from Jamaica and The Bahamas were disqualified.

Minister of Tourism Cecil “Ces” McKie welcomed the athletes home during a reception at the VIP lounge at Argyle International Airport Tuesday evening.

Roban told iWitness News that he felt “pretty good” about his performance.

He said he was expecting to do very well in the 800-metre and praised the lessons given by his coach Rawlson Morgan during the last days before the games for his performance.

Meanwhile, Woodley said she was very pleased with her performance.

“It was a great learning experience and I do hope for many more opportunities for us to come, and the team,” the 17-year-old Bequia resident who is a first year student of biology, chemistry, and physical education at the Community College told iWitness News.

She said that she has been involved in athletics since she was 6 years old but only began taking the sport seriously when she entered the Girls’ High School.

And, Richards, a 16-year-old student of the Intermediate High School was proud of the team’s performance.

“I think we did great and there is much more to look forward to,” she said.

And, Vincent, a 16-year-old resident of Layou who attends the Central Leeward Secondary School, told iWitness News that it feels good to have won gold.

Maloney travelled to the United States and did not return to St. Vincent with the team.

5 replies on “SVG’s CARIFTA athletes pleased with their performance”