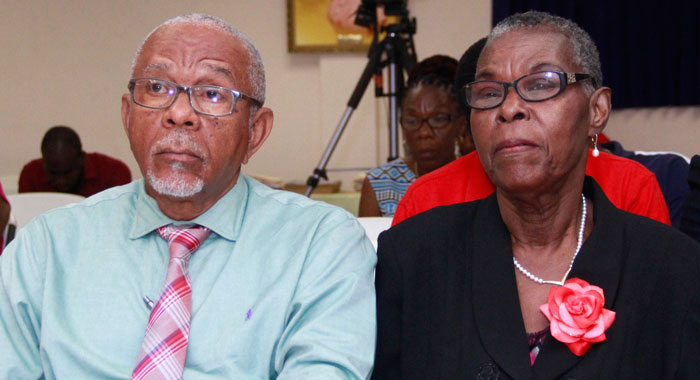 The St. Vincent and the Grenadines Teachers’ Union honoured two former educators during the union biennium in Kingstown on Thursday.

The two honourees are Hermia Scott and Robert Fitzpatrick.

Read the citations below:

Hermia Maria Claudina Scott nee Marshall was born on the island of Bequia on November 11th 1940, the second daughter and the fifth of thirteen children born to Caspar and Maria Marshall. Like most of her siblings she was home-schooled by her father-a renowned head teacher and her mom. She won a scholarship to the Girls’ High School in 1952 in an era where four scholarships were awarded annually. She has fond memories of her head teacher Janet Buchan, who she would later reconnect with while at university in Scotland, Pauline Allen Young and Elaine Gatherer Connell.

A good teacher it is said is like a candle consuming itself to light the way for others a saying that embodies her approach to teaching. Her name is synonymous with education as evidenced by her 50-plus years of service in the noblest of professions. Her journey began with her first post at the Clare Valley Government School followed by the Buccament Primary and Lodge Village Government Schools, In 1969, she found the courage to enrol at the Teachers College. Her delayed entry was not because she thought the work was beyond her capability but more so the challenges of being a wife and mother to two young daughters. It was the first year teachers attending the College were placed on a bond causing many to drop out. Twenty students, who remained loyal to each other would graduate in 1971. It was a watershed year for the College in that no student was referred or failed their course.

While at the college, Belle Allen, organizer of home economics island wide and her lecturer observed her culinary skills and the ease with which she manoeuvred in the kitchen. This prompted Miss Allen to encourage her to teach home economics an offer, which she accepted. Upon graduating Teachers College she was placed at the Barrouallie Junior Secondary School under the leadership of George Bailey. This was the start of her 24-year association with the fishing town and the pivotal role she played in educating and transforming lives. Scott was one who gave children a chance at secondary education when they would not have otherwise gained the opportunity. Dr Audain, a veterinarian, is one such grateful beneficiary of her kindness. While at the Barrouallie Junior Secondary School she was offered a scholarship at the Jamaica School of Agriculture to pursue a Diploma in Household Science. When a vacancy arose for a principal at the Barrouallie Primary School she was again encouraged to take up the mantle, which she did. Her thirst for knowledge led her to Moray House College to pursue a diploma in Education. While there she sought and gained admission to the University of Sterling to read for a degree in Education. Upon her return she was elevated to the post of Principal of the Barrouallie Secondary School where she served until her retirement in 1995.

During her tenure the Barrouallie Secondary School made tremendous strides in academics, netball, football and drama to name a few. She remembers with pride the school being the proud winner of the Best kept school for three consecutive years. She is also proud of the foresight that saw her moving graduations to a morning event, a feat that today is second nature. It is often said that teachers do not retire and in 1996 she was recruited by the late Othniel Sylvester to head the Intermediate High School where she served from 1996-2000. She has also given yeoman service to the Bethel High School as a CSEC invigilator and supervisor. In addition she was a CSEC SBA marker for Home Economics.

Mrs. Scott is one whose love for children and love for people in general has been the driving force that ignited her. She sees herself as forgiving, a disciplinarian, authoritative and derives tremendous pride from seeing her children achieve their potential. A devout Christian, Mrs. Scott has seen the benefits of casting her bread on the water evidenced by the love, respect and high esteem in which her students hold her. Mrs. Scott was not just an extraordinary teacher but an extraordinary human being who continues to inspire and transform lives.