James concerned about future after 17 years of ULP 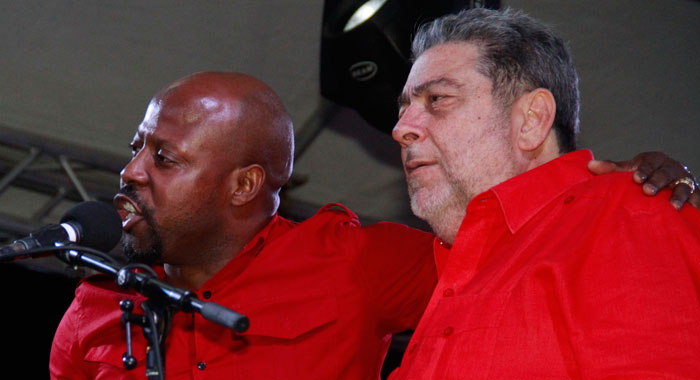 A Unity Labour Party senator said that while the party and its supporters celebrate 17 years of governance in St. Vincent and the Grenadines, he is “concerned about the type of future we want for St. Vincent”.

“I am concerned about where do we go after 17 years and I am most certainly concerned after our political leader has determined he wants to hand over power to someone else in this country,” Carlos James told the ULP celebration rally in Calliaqua Sunday night.

“Each and every one of you should be concerned as well because while we celebrate the gains, there is much work to do,” said James, who fell short by 12 votes in his first attempt to wrest North Leeward from the main opposition New Democratic Party’s Roland “Patel” Matthews in the 2015 vote.

“And I speak of the revolution that we have had in this country. Not a revolution with a militia, but a revolution that has liberated our people through the transformative social policies of the ULP government. We have seen a revolution in every aspect of governance that touches the life of every single quarter of St. Vincent and the Grenadines. But we cannot create room for complacency. The revolutionary struggle is not quite over,” James said.

James said that the “war” in St. Vincent and the Grenadines is  “between good and evil; progress over backwardness; development against underdevelopment; the wicked and mind-bending practices of character assassinations and distortions of SCL, Henley & Partners and the NDP against the people of St. Vincent and the Grenadines and the ULP government…”

He said that to tell the real story of the ULP is to tell the story of the struggle of Vincentians and “the great progress we have made under a progressive and forward thinking enterprise”.

The senator said that some citizens think the right to vote is not their concern.

“… but politics gives birth to policy, without the people and their ability to exercise their right to vote and to bring about change, there would be no Argyle International Airport, no reforms in education and health care, land distribution…” he said.

James said he has been pondering and asking the question, “What kind of country do we want after 17 years of ULP?”

“I want us to imagine a future with hundreds of jobs, more and more jobs for Vincentians; those leaving school and other tertiary level institutions.

“I want you to imagine a future with every single child having the opportunity for universal access and primary education and spreading their wings to levels to which 17 or 20 years ago they could not dream or imagine that they would be.

“I want us to imagine a future, a future where there is a new city at Arnos Vale with shopping complexes, offices with multinational and international companies, a brand new cruise terminal in Kingstown, significant investments in agriculture and medicinal marijuana with increased exports to foreign markets through the Argyle International Airport.

“I want us to image a future, an environment for the business sector and micro enterprises to flourish, thousands more homes being built across the country for poor and working class Vincentians,” he said, telling party supporters that that future is happening now, before their very eyes.

“We are realising a dream in St. Vincent and the Grenadines, a long-held dream of every farmer, every fisherfolk, every community leader and builder, that St. Vincent will be a better place for the ordinary citizen.