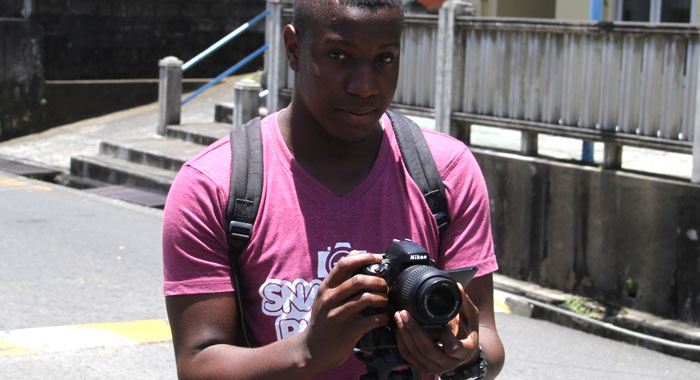 A videographer hired by the Morgans records journalists outside the Kingstown Magistrate’s Court. (iWN photo)

The preacher and his family being tried on a grievous bodily harm charge related to their pouring hot water on a man two years ago brought their own camera crews to court on Thursday.

It was not clear whether Nigel Morgan, his wife, Althia — who is an office clerk at The News newspaper — and their 23-year-old daughter, Krystal, were displeased with the news media’s coverage of the case, hence their decision.

When the trial ended on Thursday at the Kingstown Magistrate’s Court, four of the six journalists who were covering the case rushed outside of the courtroom to take photographs of the three defendants.

The media workers, in turn, had cameras pointed at them as Mr. Morgan ordered two photographers to take photos and videos of the journalists.

Krystal also took out her cellphone and assisted, taking photographs of Kenton X. Chance, executive editor of iWitness News, who was photographing her.

It was not clear why the Morgans had the photos and videos taken.

After the Morgans left, one of the photographers told the journalists that they (photographers) were hired to do a job, adding that it was nothing personal.

The Morgans were tried on a charge that on April 9, 2016, at Hopewell, Mesopotamia, they unlawfully and maliciously inflicted grievous bodily harm upon Cuthbert “Mafia” Victory of Caruth Village, Mesopotamia.

A video of the April 9, 2016 event shows the older Morgans each holding one of Victory’s hands while their daughter poured what is said to be hot water from an electric kettle unto his back.

The video was not tendered into evidence because the person who recorded it left the state before police could seek a deposition. (Scroll for video)

However, the key witness for the defence, Clint Antoine, one of the Morgan’s neighbours, has given damning evidence in support of the Crown’s case.

He told the court in April 2017 that Mrs. Morgan shoved Victory about two times and he held on to a tree and they were still wrestling.

He said that Victory and Mr. and Mrs. Morgan fell into the drain and the fight continued.

Using a police officer to demonstrate, Antoine told the court that Mr. and Mrs. Morgan each held Victory on both sides of his body in such a way that he couldn’t set free his hands.

Antoine said that while they held him in that position, their daughter came with a black and silver kettle.

While Mr. and Mrs Morgan were still holding Victory, with his back turned to all three of the Morgans, Krystal poured the contents of the kettle onto him, Antoine told the court.

He said that Mrs. Morgan then swung Victory, causing him to hit his head against the stone wall of the drain and he then saw what appeared to be blood on Victory’s body.

Victory then staggered out of the drain then began to run, Antoine said, telling the court that it was at this point that he, too, left the scene.

In his submissions on Thursday, Delplesche told the court that Victory is in the habit of coming to one of the Morgans’ neighbours playing music that the defendants found to be offensive.

He said that Mr. Morgan confronted his neighbour, Clint Antoine, Victory’s friend and asked him to ask Victory to turn down the music.

The conversation escalated into an exchange of words between Victory and Mr. Morgan, who traded insults.

The exchange further escalated when Mrs. Morgan intervened when Victory told her husband that she had lowered her standard in marrying him.

The prosecutor told the court that the older Morgans each held unto Victory’s hands and shouted “Bring the thing,” at which point their daughter came with the kettle of water and poured it on the virtual complainant’s back.

Delplesche said that while Mr. Morgan claimed that he was calling for oil to anoint Victory, Victory had complained about a burning sensation in his face when Mr. Morgan placed what he said was olive oil on him.

As a result, Victory, who had not solicited prayer or any anointing from the Morgans knocked away Mr. Morgan’s hands, resulting in an even further escalation of the fracas.

“How would Krystal know that it was she that Nigel Morgan was referring to when Nigel Morgan said to bring the thing?” the prosecutor said, nothing that the younger female Morgan had said that she was unwell because of her period and was about to make a cup of tea.

“The defendants didn’t cry for help. All they said was bring the thing. Other people were around; no one else went with anything,” Delplesche said, adding that there is no evidence that Krystal’s name was called to help her parents during the fracas.

Delplesche told the court that the person who was under attack that day was Victory.

But, defence counsel Kay Bacchus-Browne accused the prosecutor of being disingenuous and twisting the evidence to support what she said was a weak and tenuous case of joint enterprise.

“They have failed to prove any foresight of the intention,” she said, adding that in their written submission, the Crown was purposely vague when the facts do not support their case.