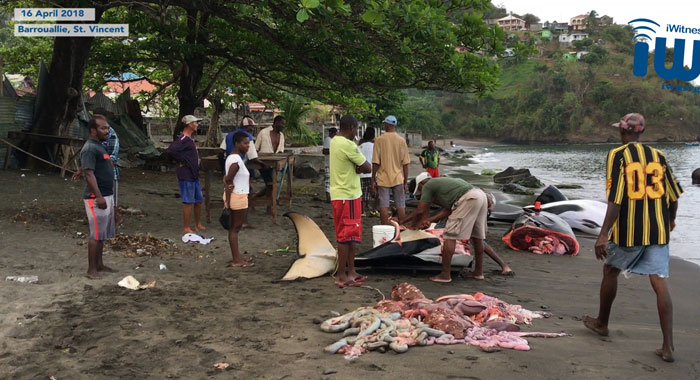 Whalers process three orcas in Barrouallie on Monday, one day after they were killed. (iWN photo)

The whaler whose crew harpooned and killed three orcas off Barrouallie, a town in western St. Vincent, on Sunday, has defended his action, saying that the kill is important to the livelihood of townsmen, and that they have broken no local law.

Three orcas, one male and two females, measuring 30 and 24 feet, were caught as they scattered a pod of short-finned pilot whales that the whalers were initially pursuing, the captain of the crew, Samuel Hazelwood, told iWitness News on Monday.

Hazelwood, who has been whaling for more than 30 years, spoke to iWitness News amidst a group of hostile whaling industry workers who were carving up the carcasses for resale to vendors.

“The prime minister said he is going to ban them (the killing of orcas). I have been fishing for 30-something years now and I came and met the older fishermen catching the killer whales. They say it is endangered [but] when you go and research on YouTube and Facebook, it is not an endangered species,” Hazelwood told iWitness News.

In April 2016, amidst local and international outcry after the whalers harpooned and killed two orcas in the presence of cruise visitors on a whale and dolphin watch tour, Gonsalves had said that his government would pass a law to ban the killing of orcas.

Hazelwood said that Barrouallie whalers would obey such a law if it were passed.

“The prime minister said he is going to ban us. Whenever he put the ban in place like the [ban on the catching of ] turtle and they say stop catch them (orcas), we [will] adhere. But there is no law right now to say don’t catch them. This is something that we have been doing for centuries,” Hazelwood told iWitness News.

“Whenever they put the ban,” we don’t have any problems.

He said that on Sunday, his brother called him saying that he was pursuing a pod of pilot whales.

“And when we were chasing the black fish, the killer whales came and started running them down [so] we couldn’t catch any. When you see them (orcas), life is really difficult for us.”

Hazelwood accused the prime minister of not understanding the plight of Barrouallie whalers and those who depend on the industry for their livelihood.

Hazelwood said that the only parts of the whales that are thrown away are the bones and the intestines.

“Everything [else] is sold: teeth, everything,” he said.

In St. Vincent and the Grenadines, the meat of the whale is cooked fresh, or dried. The oil is use in the treatment of a number of ailments and after the oil is removed from the blubber by frying it, the processed blubber, called “crisps” is eaten as a snack.

Hazelwood told iWitness News that fishermen go out to sea every day, but only meet killer whales about four times annually.

He, however, said that when orcas are in the area, whalers could go for two months without catching pilot whales.

Barrouallie whalers have been killing short-finned pilot whales as part of a century-plus-old tradition in this multi-island nation.

In Bequia, an island in the northern Grenadines, the International Whaling Commission allows whalers to kill four humpback whales every year as part of their century-old indigenous whaling tradition, but whalers sometime go for years without a single kill.

The orcas, on Sunday, bring to nine the number of the cetaceans that Barrouallie whalers are known to have killed since 2015, when four orcas were killed.

A whaling industry insider, who asked not to be named in this article, told iWitness News on Monday that it is highly unlikely that the Gonsalves-led Unity Labour Party administration would pass a law banning the killing the orcas before the next general election.

Gonsalves’ government is into a second consecutive term with a one-seat majority in the nation’s parliament and the commenter told iWitness News that the Barrouallie whalers and their extended families are largely supporters of the ruling Unity Labour Party.

To ban the killing of orcas would amount to taking food out of the mouths of the whalers and other persons who benefit from the industry and they will punish the government at the polls for it, the industry insider told iWitness News on Monday.

Meanwhile, speaking on radio in April 2016, days after iWitness News broke the news of the killing of the orcas, Gonsalves condemned the whalers’ action.

“… what he did was plain wrong. Not just because it happened in front of tourists, but [because] he must not kill the orcas.”

The prime minister noted that there is an international ban on the killing of bottlenose dolphins, and killer whales and SVG has signed on to the ban.

He further noted that four killer whales were killed in the Central Leeward town in July 2015.

“And the fourth one, they had so much meat that some of the meat spoiled,” Gonsalves said.

“What will happen is that legislation will be brought to stop that killing. It will be made an offence in the same way we have done with turtles,” said Gonsalves, whose government banned the killing of turtles, harvesting of their eggs or disturbance of their nests, effective Jan. 1, 2017.