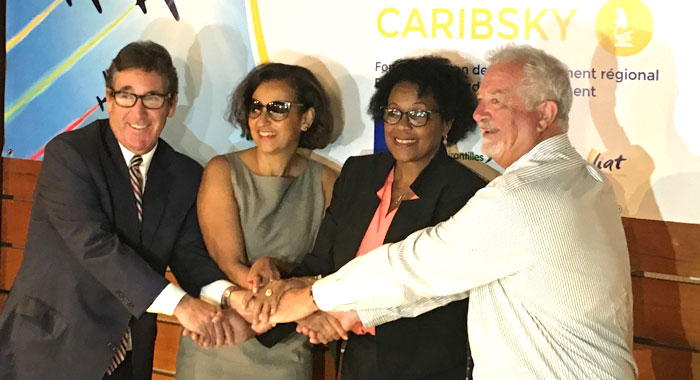 BASSE-TERRE, Guadeloupe (CMC) — Three regional carriers have launched an integrated travel project that will significantly reduce the cost of travel within the English-, Dutch-, and French-speaking Caribbean.

The Antigua-based regional airline, LIAT, has joined the French-owned Air Antilles and the state-owned Sint Maarten-based Winair in the Caribsky project, funded by INTERREG, an European Union initiative that they hope should “ultimately foster free movement of persons and boost economic growth” across the English, Dutch and French Caribbean, “based on a brand new network of truly interconnected airlines”.

Air Antilles chief executive officer, Serge Tsygalnitzky, speaking at the launch of the project here on Tuesday, said that under the programme, a traveller would be able to purchase a single ticket and travel on any of the three airlines to 32 destinations across the region.

“Sometimes, a customer has to purchase two tickets, three tickets to get to a single place. Now, what we want you to be able to do is travel seamlessly anywhere you want to with a single ticket.”

He said that the passenger benefits include more direct flights, increased connections, increased frequency of flights, lower fares, flexibility at airports, including not having to retrieve luggage while in transit and a future common loyalty programme.

Under the Caribsky initiative, the three airlines will have a combined fleet of 25 aircraft and the capacity to move 1.4 million passengers through 70,000 flights annually. The staff complement will be 1,100 and there will be five hubs across the region.

“We have very few direct flights between islands, we enjoy very few connections or no connections at all, prices are also deemed to too high and quality of service too low,’ Tsygalnitzky said noting that in the region, passenger volumes are very low and commuters travel along colonial and linguistic lines.

“There is very little inter-lingual travel,” he said, noting that there is also very significant differences in buying power, with some jurisdictions using the United States dollar, others, the Euro, and a range of other currencies.

“For examples, if we have a flight between Paris and New York, you will see 50 per cent American on the flight and vice versa. But if you open a flight between Guadeloupe and Cuba, for instance, you are going to have 95 per cent Guadeloupian passengers as opposed to five per cent Cuban passengers, which is a real difficulty for air transpiration.”

Tsygalnitzky also noted visa requirements for travel without the region and difficulties in obtaining the document.

He said that the airlines that have entered the partnership are too scattered, their fleets too small and they operate in jurisdictions where traffic rights are highly regulated and protectionism is built in, even as there is low profit on certain sectors.

“In the Caribbean, Air Antilles, LIAT, and Winair are complementary and share a common vision. They wish to facilitate air transportation, provide more services for passengers, make transportation more accessible, stimulate economic development,” he said, justifying the need for the Caribsky project.

Chairman of LIAT’s board of directors, Jean Holder welcomed the development, telling the launch that while the Caribbean is supposedly the region most dependent on tourism, what is without dispute is that it is the most airline-dependent region of the world.

Holder said that the socio-economic and cultural life of this region depends on “the extent to which we can share connectivity with each other.

“I am very proud to say that LIAT has been trying to do this for well over 60 years. And 60 years in the life of any airline, big or small, is a very long time,’ Holder said, adding that he believes that the new initiative is very important to the life of the region.

LIAT’s chief executive officer, Julie Reifer Jones, welcomed the initiative, adding, “The project started over a year ago from our end, there have been a lot of discussions.

“And, as you know, we were faced with some really devastating hurricanes last year and that interrupted the whole process. So I am really proud that we have been able to bring the project to fruition.”

St. Maarten’s Minister of Tourism, Economic Affairs, Transportation and Telecommunications, Cornelius de Weever said that LIAT, WIN AIR and Air Antilles are working together to make it easier for residents and visitors to travel within the region.

“They are working to lessen the time it takes to fly in the region because, let’s face it, it is often easier to cross the Atlantic than travel the region, and at a lower cost,” de Weever said

INTERREG Caribbean is a European Territorial Cooperation programme allowing operators from Guadeloupe, French Guyana, Martinique and Saint Martin to implement win-win projects with their neighbours in the Caribbean, comprising more than 40 countries and territories.

Vice President of the Guadeloupe Region, Marie-Luce Penchard, said the Regional Council of Guadeloupe has been looking for very pragmatic cooperation initiatives.

“And I really have endeavoured to find projects that will provide greater exposure, greater visibility to public funding, and I am really proud of this because this is one of the first projects that really allows us to show that we really are cooperating the way we want to.”

Godfred Pompey, permanent secretary in the Ministry of Civil Aviation in St. Vincent and the Grenadines, which, along with Antigua and Barbuda and Barbados is the main shareholders of LIAT, said that the Caribsky alliance is in keeping with the policy directive from LIAT’s shareholder governments “in terms of establishing other strategic alliances”.

He said Caribsky demonstrates “a willingness to explore and forge new partnerships for the benefit of our peoples”.