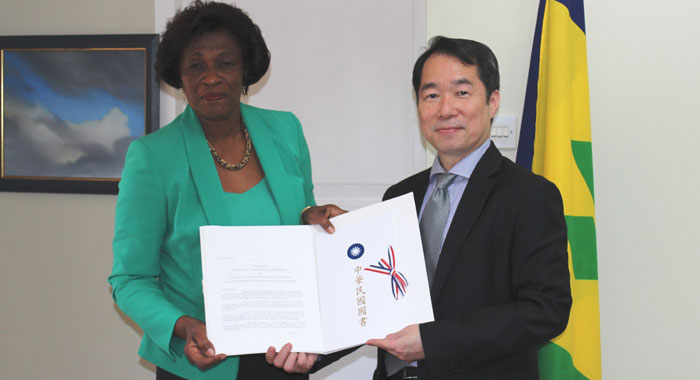 The new ambassador of the Republic of China (Taiwan) to St. Vincent and the Grenadines, Calvin C.H. Ho, presented his credentials to Susan Dougan, Governor-General’s Deputy on April 10 at the Government House.

Dougan welcomed Ho and expressed her appreciation for the fruitful bilateral cooperation between Taiwan and St. Vincent and the Grenadines.

Dougan expressed delight on the cordial bond fostered between the two countries and envisaged even closer collaboration in the years to come.

He also expressed gratitude to the staunch support rendered by the government and people of SVG in the international arena over the years.

Reiterating Taiwan’s commitment to the bilateral relations between the two countries, Ho stressed that he will continue to further strengthen and cooperate closely with the Government and People of St. Vincent and the Grenadines.

Ho said that on landing at the Argyle International Airport, he saw the lush mountains and turquoise sea of SVG.

He said he is convinced that his tenure will be a rewarding one.

Her replaced Baushuan Ger, who returned to Taiwan at the end of March after a three and half year tour of duty.