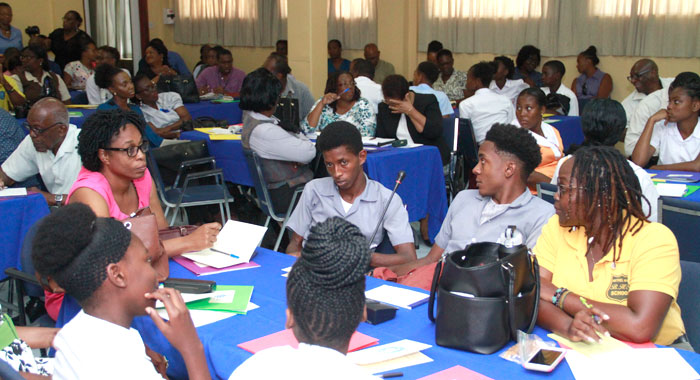 Students and other persons at Wednesdays event. A criminologist says that most youth who stay in school will age out of delinquency by the time they are 17. (iWN photo)

As St. Vincent and the Grenadines tries to prevent its youth from becoming criminals, it must focus especially on two groups of young males: 12- to 16-year-olds and those 17 to 25 years old.

Jamaican criminologist and University of the West Indies professor, Anthony Harriott says that 12-16 years old is the first danger point for criminality, especially among males.

“This is the time they should be in school and what you need are institutions; support systems, basically to keep them in school,” he told Wednesday’s opening of the National Conversation on Crime and Violence organised in Kingstown by the SVG Christian Council.

“Is there a programme for school retention here in St. Vincent? Have you invested any money in that? If not, I think it is something you should consider. Because if you keep them in school, most of them will age out of delinquency by the time they are 17. They do it on their own, with minimal support.”

Harriott, who is also director of the UWI Institute of Criminal Justice and Security, said a few young persons will remain problematic and may move on to the next age set that ends around age 24 or 25.

“So you need to have a second set of programmes and institutions to serve that problematic age set between the 17 to 24, 25.”

Harriott said the problematic youth in the 17-25 youth would be fine if one of two things occurs: “they get a job or they get married, and they age out; not a problem for society at all.

“My point to you is that if you understand these things, then it is a matter of as a society, crafting the support system, simply to help them to make those two transitions from adolescence to adulthood, from school to work.

“That is what it is about. If you succeed in that, you will never have that kind of chronic crime problem or elevated murder rates and so forth. You remain a healthy society.”

He said that whatever SVG does regarding a crime reduction programme must be informed by a theory of change.

The professor suggested that, as a region, the Caribbean’s violent crime problems are rooted in the fact that the countries are transitional societies.

“For many of us, within our lifetime, we have seen rapid changes in all of the important aspects of our society,” the academic said, adding that he has been travelling across the region for almost 40 years and has witnessed these changes himself.

“The old has collapsed and the new is still taking shape. We are in what I call a transitional moment. There are huge challenges and the burden of responsibility but also [there is] considerable freedom to shape what we wish to become. This remains the big, post-independence challenge and issue for us.”

Harriott said that a group of researchers recently analysed a large set of data on delinquent young men, people who had ended up in prisons across a number of countries in Latin America.

“If you didn’t complete 12 years in schooling, you don’t have much of a chance to make it in the world of work,” he said.

“My point is that these are deep social and psychological changes that have been occurring in our society over the last 30-40 years. They are difficult to manage and we must have appropriate institutions and programmes to manage this moment of transition. The upshot of these changes includes high rates of violent crimes.”

There was a general tendency for homicides to increase right across the Caribbean over the last 20 years, Harriott said.

“There are some outliers and some exceptions — Grenada and Barbados are two positive exceptions. They have managed to maintain a more or less flat line, low rate of homicides and, of course, the other set of outliers are Jamaica and Trinidad, and, at one point, the Bahamas as well – negative outliers on the high side. But, most cluster in the middle and are tending to increase.”

Harriott said that while some societies have managed better than others, they are “all subjected to similar forces that tend to move our violent crime problem in a negative direction.

“And some of these sources include at the structural level, that is, at the level of society, not at the level of the individual, an inequality strongly associated with homicides, indeed, one of the better predictors of your homicide rate. Access to quality education is another,” Harriott said in the address in which he suggested ways in which SVG could contain its homicide problem.