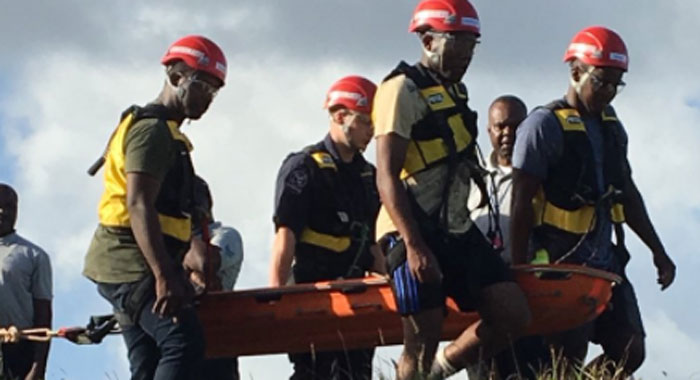 The eight-day GlobalFire Fire-Ground Operations Training Course was compledted by 63 participants who were drawn from the RSVPF, the SVG Red Cross, the Ministry of Tourism and the Teachers Union.

Assistant Commissioner of Police Carlos Sampson thanked GlobalFire, a Canadian charity, for the training they delivered. He also admonished the graduates to take pride in the training they received and to hang the certificates high in acknowledgement of this.

Fitzgerald Huggins, SVG’s Consul General in Toronto, who initiated the course, thanked Prime Minister Ralph Gonsalves and Minister of Foreign Affairs, Sir Louis Straker for being receptive to the initiative and allowing GlobalFire to bring the training to St. Vincent and the Grenadines.

Huggins explained that GlobalFire bore most of the cost of providing the training and donated hurricane relief supplies to the National Emergency Management Organisation.

He further explained that the success of the training champions the importance of networking, and the use of social media to benefit the nation as opposed to its use as a medium to push gossip that could harm the country.

According the Huggins, the facilitators of the training course never met each other prior to the training, but as a result of social media they were able to contribute to the collective success of the course.

Assistant Superintendent of Police and SVG’s Fire Chief, Joel James credited Huggins for his involvement in creating the network, which ultimately resulted in the training.

James explained that the planning that went into making the training a success, was nothing short of tedious, and praised the Fire Department and the leadership of the constabulary for their contributions in making the course a success.

James said he was proud of the performance of the participants, especially the civilian participants.

He stressed that although he would have liked to train more police officers and civilians, the number of participants present was already a huge task for the seven-member GlobalFire team, but the instructors still ensured that each participant received training that is internationally recognised.

Inspector Junior Simmons said the training course goes in line with the vision of the RSVPF, to manage effectively the organisation’s human, technical and material resources to safeguard national security.

Hedescribed the training as a targeted approach by the leadership of the the police force to improve the quality of service rendered to residents of St. Vincent and the Grenadines.

Captain Michael Sayers, a fireman with over 27 years of experience, led the GlobalFire team.

Sayers posited that fire-ground operations training is an accumulation of history. He asserted that fire fighters learn from the mistakes and advancements of other fire fighters, and this newly acquired knowledge must trigger the further development of techniques that would protect fire fighters and other first responders.

He expressed his appreciation for the opportunity afforded by the local constabulary, to allow GlobalFire to conduct the training. He also encouraged the participants to continue to build on what they were taught with regular practice.

GlobalFire is a charitable organisation, which delivers fire-fighting training to members of volunteer and professional fire fighting organisations in developing countries, in order to enhance fire protection and emergency medical services in the local community.

SVG is the 81st country to receive this training.