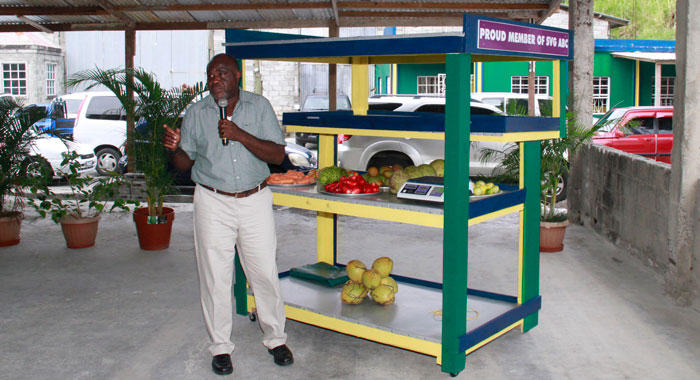 The St. Vincent and the Grenadines Agri-Business Co-operative Ltd. (SVG ABC) was launched in Yambou on Tuesday with the unveiling of a point of sale that members say would change, for the mutual benefit of producer and consumers, the way agricultural produce is retailed locally.

SVG ABC was launched four months after businessman Leon “Bigger Bigs” Samuel pitched the idea in December, saying that farmers could help to create a stable price for produce if cold storage is used.

Speaking at the launch in Yambou, Samuel said the wooden point of sale was designed and constructed in-house.

“It is attractive, it looks nice, it looks good and it is a way for us to begin the changing of the image that agriculture holds at this time. For me, it can also help to clean up our unsightly city, Kingstown,” Samuel said.

He said the point of sale has three levels, each of which is about 6 feet long.

“If you are to put up these three levels on the streets of Kingstown, it is going to take up 18 feet of space, each. But the way it is, you will get that same capacity of 18 feet in one six-foot space. And we are hoping it will catch on. But it is a way to give a quick break, a quick assistance to our members and farmers of St. Vincent and the Grenadines.”

The point of sale is also painted in the national colours and has the co-operative’s branding.

It also includes a digital scale, as unlike with many vendors in the market, the produce will be sold based on weight.

To illustrate, he took up a breadfruit, saying that the co-operative will sell the product at 75 cents per pound.

The audience said the breadfruit that Samuel was holding would sell for EC$3 in Kingstown.

However, because of the weight of the breadfruit, at SVG ABC, it would be sold for $2.42, Samuel said.

He picked up larger breadfruit that he said would easily fetch $5 in Kingstown.

However, the price at SVG ABC, based on the weight, would be $4.

“So don’t be fearful of weight. It all depends on how much the farmers decide that they can make a profit by selling their produce.

Samuel said that persons could even buy a single mango, according to the weight.

He told the ceremony that he thinks consumers pay too much for local agricultural produce, but this is not the fault of farmers.

“I believe it is the way the system is set up,” Samuel said.

He added: “What creates the problem is the amount of hands that has to handle it before it reaches the consumer and from one hand to the other hand, the prices go up.

“But the farmer is out of the picture already. They get a $3 per pound [for their produce], that’s it. But you would be shocked to hear the same $3 per pound cucumber they might [have] sold is now selling for $6.”

He said such a situation couldn’t continue, he said, adding that SVG ABC is also hoping to change the perception of agriculture as a nasty job, with produce that is “not presentable … not beautiful.

“… this cooperative is going to make sure that all of that changes and bring respectability to the people in the industry who matter, which are the farmers.”

Samuel said the cooperative is recommending that farmers begin to retail their produce directly to the consumer.

“I, personally, believe that our country and our population is too small to have so much of handlers handling the produce, and when it does reach the consumer, it is too expensive. And then it leaves room for the importation of foreign produce, and that is what is the problem in St. Vincent and the Grenadines. We have to stop that because right now it is not benefitting the farmer the way the system is,” he said.