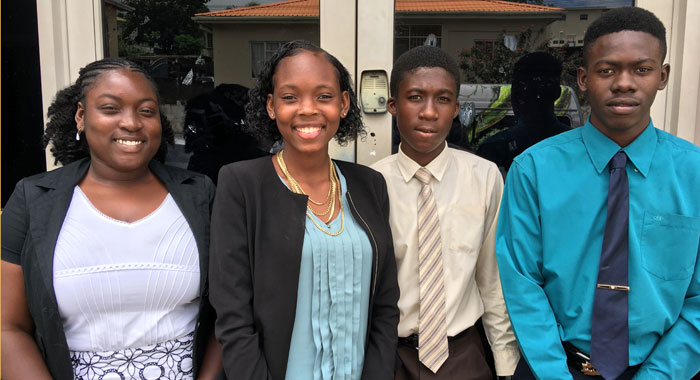 But not for any infraction of the law.

The four form 5 students spent Wednesday observing the proceedings at the Kingstown Magistrate’s Court as part of an initiative at their school to help them to get familiar with the world of work.

The firm sent them to the court to observe the proceedings.

As the court convened, Senior Magistrate Rickie Burnett welcomed the students, saying that he had had a brief discussion with them earlier in the morning.

“They all use public transportation,” the magistrate said, noting that Wednesday is the day on which he deals with traffic matters.

Counsel Vynnette Frederick, who was in court representing a man charged with not wearing his seatbelt, joined in welcoming the students.

She said, apparently lightheartedly, that it was unfortunate that the students were in court on the traffic day and would, therefore, miss “some of the more salacious things”.

“It is interesting that they are taking an interest in the court,” the lawyer said, and noted that the students were all smartly attired.

Lawyer Grant Connell, who was also at the Bar table, noted that the students were on time and well attired.

“Two attributes that even the police don’t seem to subscribe to,” Connell said.

The students spoke to iWitness News during a break in the proceedings. They said that none of them have ever been to a court before.

Bramble, a technical studies student, wanted to see how the court works.

“It is good and bad at the same time. To see that some people who [I believe] are guilty of things say they are not guilty,” the Rose Hall resident said.

Bramble, 16, said he felt that the persons were guilty because of the way they acted in court

Laborde, of Sion Hill, said she was interested in seeing and observing the court proceedings.

The Form 5 technical student, who is 15, said she was interested in studying law but changed her mind because it seems that becoming a lawyer is a long process.

Richards, 16, of Glen, has also been thinking about studying law, but also thought it is a long process.

Richards told iWitness News that he was interested in learning how people are sentenced.

Walters, 16, of Diamond, a business student, went to the court looking for a learning experience.

“It is good so far. I learnt new stuff, like how the magistrate deals with people who are guilty or not guilty.”

He especially remembered when the magistrate denied bail to a man who was reportedly shot in the leg by a security guard.

She said that the attachment aimed to help the students prepare, in a practical way, for the world of work.

Some of the students also went to Finishing and Furnishing Furniture Store and others to Joyette Auto Collision.

Latchman said that as part of the initiative, students had also participated in mock interviews at business places.

3 replies on “4 IHS students in court”