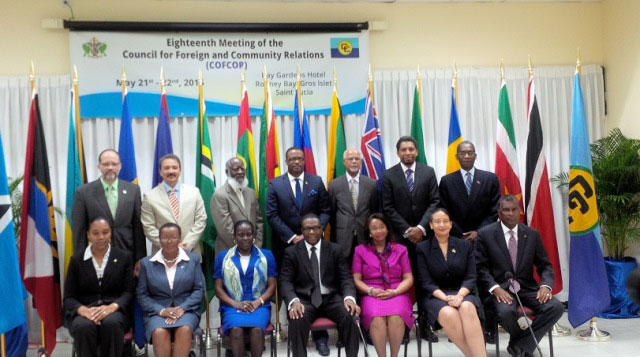 FLASHBACK: CARICOM Ministers of Foreign Affairs and Heads of Delegation at the COFCOR meeting last year.

GEORGETOWN, Guyana — The Caribbean Community’s (CARICOM) relations with the United States, and its engagement with the United Kingdom post-Brexit, are among matters listed for discussion when CARICOM Foreign Ministers meet this week in Nassau, The Bahamas.

The 21st Meeting of the Council for Foreign and Community Relations (COFCOR), which runs from 7 – 8 May, will be chaired by the Minister for Foreign Affairs of the Bahamas, Darren A. Henfield.

Foreign Ministers will also discuss CARICOM-Canada relations and cooperation with multilateral organisations, including the Commonwealth, the United Nations, the Community of Latin American and Caribbean States (CELAC), the Organisation of American States (OAS), and the Association of Caribbean States (ACS).

This meeting will underscore the synergies between foreign policy coordination and human and social development with the ministers discussing CARICOM’s position on the development of an international legally-binding instrument on the conservation and sustainable use of marine biological diversity of areas beyond national jurisdiction.

Attention will also be given to issues relating to reducing CARICOM’s vulnerability to disaster risks and the effects of climate change, resilience financing and sustainable debt management.

Health-related issues, including the UN General Assembly High-Level Meeting on Tuberculosis in September, and matters concerning the Prevention and Control of Non-Communicable Diseases (NCDs) are also on the agenda.

As the African, Caribbean and Pacific (ACP) Group of States prepare to negotiate a new agreement with the European Union following the Cotonou Agreement that expires in 2020, COFCOR will review a proposal by St. Vincent and the Grenadines on this topic.

Space has been reserved in the packed agenda for discussions on CARICOM’s tax compliance; its participation in upcoming meetings of the G7 and G20; strengthening ties with Norway, Romania and Germany through engagements with representatives from those third states; and border issues within the Community.