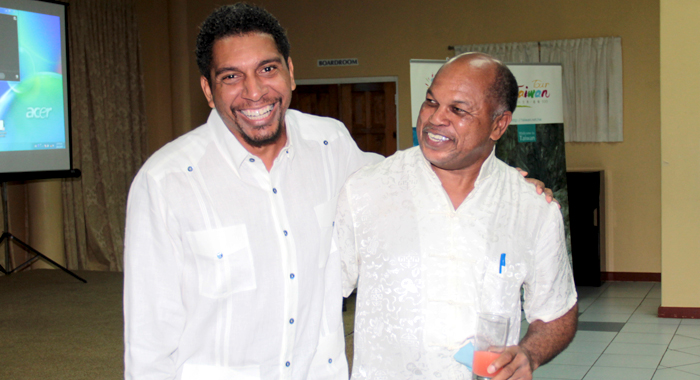 Camillo Gonsalves of the ruling Unity Labour Party and then NDP chair, Dr. Linton Lewis at an event in Kingstown in October 2015. (IWN photo)

Minister of Finance Camillo Gonsalves has admitted to Parliament that he first got the idea of a climate contingency fund from former opposition senator, Linton Lewis, whom he defeated in 2015 to become Member of Parliament for East St. George.

Gonsalves also told Parliament that he had rubbished the idea, which his government went on to implement.

The Contingency Fund was introduced in 2016 and was capitalised by one percentage point of the Value Added Tax, which moved from 15 to 16 per cent.

Speaking during the debate on the Climate Resilience Bill, which was passed into law on Thursday, Gonsalves said that the government has populated and continue to populate a contingency fund.

“I recall — if I am being honest, the first time I heard the contingency fund mooted in this house was by the then honourable Senator Lewis.

“Linton Lewis raised the matter and said, look, we have all of these problems maybe we should have a contingency fund. And I would admit, as well, that I poo-pooed the idea at the time,” Gonsalves said.

“Because I said the magnitude of this problem is greater than anything that we could raise ourselves. But the central wisdom of his point was that we would always have need for resources immediately and we have to respond immediately.”

He noted that said the contingency fund was started by increasing VAT by one percentage point.

He said the International Monetary Fund commended the government for the move but said more needed to be done.

“The IMF said the government should increase resources for the Contingency Fund and implement initiatives to build resilience against natural disasters. The authorities have earmarked revenue for the contingency fund – which is the 1 per cent on VAT, but resources are insufficient.”

Gonsalves said the government could not add another percentage point on VAT.

The finance minister said one of the ways is the environmental levy.