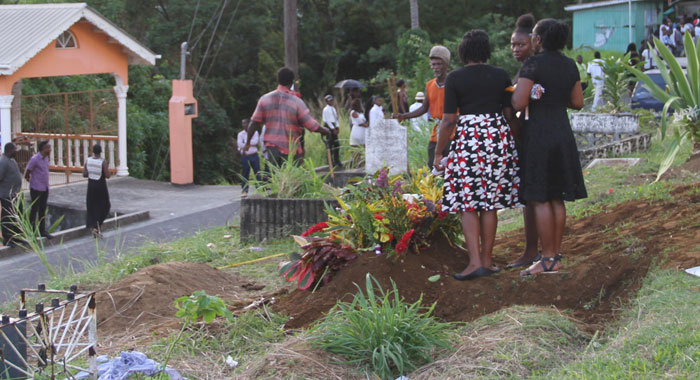 Mourners fled the cemetery after the attack on the man. (iWN photo)

A man paying his final respects at his wife’s funeral was rushed to hospital on Sunday evening after being attacked and beaten by a mob at the Chauncey cemetery.

Some mourners used their bodies to attempt to shield Paul Stephen of Keartons, Barrouallie from the blows inflicted on him.

The man was paying final respects to his wife, Je-Tonnia Thomas-Stephens, 32, who was found dead at their home around 6 a.m. on May 10.

All indications are that she died overnight.

Witnesses say Mr. Stephens, 42, appeared to have a large wound to his face after being struck with stones about the body at the burial ground.

The commotion resulted in mourners scampering from the burial ground even before the deceased was given her “crown of roses” — flowers were placed on her grave.

The development came after a funeral service at the Questelles Seventh-day Adventist Church during which Mr. Stephen gave a tribute to his late wife.

When Stephens found his wife dead on May 10, he called police, who noted that the woman’s body had no sign of violence or foul play.

However, that did not stop persons from speculating that Mr. Stephens was somehow involved in the death of his wife.

Some persons took to social media circulating a photo of a woman with her throat slashed, claiming that it was Mrs. Stephens’ body.

However, police indicated that the photo was not that of the deceased woman.

An autopsy later revealed that Mrs. Stephens died of heart failure related to an undiagnosed heart condition that had made the organ larger than normal.

One relative has agonized to iWitness News over the fact that the heart condition had gone undiagnosed after the woman’s encounters with the healthcare system during and after her pregnancy.

“She has a 4-month-old baby. She should have been showing signs and they should have picked it up. I don’t know how that add up,” the relative told iWitness News in immediate reaction to the findings of the autopsy.

The finding of the pathologist seems to have halted some of the speculations about the woman’s death.

However, Sunday’s development shows that some persons remained unconvinced that Mr. Stephens was not involved in his wife’s death.

The decision of the mob to inflict the savage beating on the man seems to be part of an emerging trend where some persons seem to think that they have a right to take the law into their hands and “punish” persons who have not been charged with or committed of a crime.

On May 18, residents of Petit Bordel inflicted a savage beating on Simeon “Gabo” Francois, 33, who was wanted by police in connection with an investigation into the abduction and sexual assault of a child.

Earlier that same week, a resident of the North Leeward village had stood by and commented while others filmed, on mobile devices, a brutal attack of a woman who was at the time holding her 1-year-old baby.

The fracas escalated and resulted in the woman receiving a chop wound that almost severed her left hand.

Last week, acting Deputy Commissioner of Police, Frankie Joseph, spoke out against vigilante justice in St. Vincent and the Grenadines.

He said that the police are the only investigative arm of the state in SVG and are responsible for investigating all offences.

“… while we are very grateful for the working relationship that we have with [the public of]…, we are also going to caution and discourage every single citizen not to take matters into their own hands.”

Joseph said that when the police issue a wanted person bulletin, they appreciate any information from the public that can lead to the arrest of the person.

“If the residents can restrain [the wanted person], we are encouraging the public to use the force that is necessary to restrain or to take that person to the police because we are not going to encourage or tolerate vigilante justice,” he said.