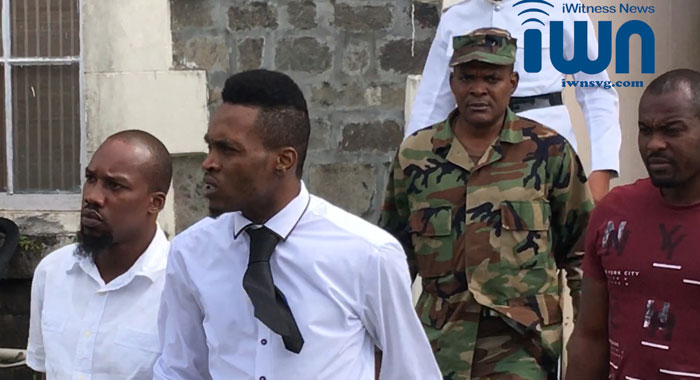 Zimroy Guy, right, and Cleroy Pinder are escorted back to prison after their murder convictions on Tuesday. (iWN photo)

Two men charged with murder, along with two others charged with robbery in connection with the July 2013 robbery of Russell’s Cineplex and the shooting death of a man in Stoney Ground have been found guilty of the crime.

The four men have been remanded into custody until July 12 for sentencing after a 12-member jury returned unanimous verdicts on those charges at the High Court in Kingstown on Tuesday.

However, the jury, which included five women, were deadlocked on some of the other charges against some of the accused men.

The prosecutor, Karim Nelson, told the court that the hung jury doesn’t bother the Crown, a suggestion that having received convictions on the more serious charges, the Crown would not bother to retry the men on the lesser charges.

A fifth man, Symcy Williams, was initially charged with murder and robbery also.

In November 2014, Williams and Pinder, who had physically robbed the cinema, pleaded guilty to that charge.

However, in their individual statements to police, they each fingered the other as the killer of New Montrose resident Rodney Grant, at Stoney Ground.

Sometime in 2015, Williams turned state witness and the Crown dropped the murder charge against him and charged Guy and Pinder with Grant’s murder.

The Crown’s case is that Guy was the mastermind of the robbery.

In 2016, Williams was sentenced to 12 years in prison for robbery.

The Crown had alleged that the men shot and killed Grant as they fled the scene of the robbery at Stoney Ground.

Grant, a 30-year-old fisherman of New Montrose, was found dead at Stoney Grounds on the night of the robbery.

It was reported that shortly after the robbery, persons in the neighbourhood heard what sounded like gunshots coming from the area of the Colours Supermarket, Stoney Ground.

On arrival at the bridge at Stoney Ground, residents found the body of the deceased lying on the ground.

A post-mortem concluded that he died of gunshot injuries.

On Tuesday, after deliberating for two hours, the jury returned.

However, the court seemed taken aback when the foreman reported that they had not reached a unanimous verdict on the murder charge in relation to Guy.

Justice Brian Cottle told the foreman that it is important that there be a unanimous verdict on the murder charge.

The foreman said yes. However, when asked, the foreman, however, told the judge that the jury did not need further elucidation of any matter related to the case, to help them to reach a unanimous verdict.

After about 30 minutes of more deliberation, the jury returned with guilty verdicts for the murder accused, Pinder and Guy.

The jury found all four men guilty of a charge that, also on July 29, 2013, at Stoney Ground, being armed with a gun, they robbed Mohandus Martin, of Lodge Village, of one black wallet containing EC$710 in cash, his property, and EC$2,239, the property of Russell’s Cineplex, and at the time of so doing and in order to do so, used force on Martin.

They was a similar verdict for Pinder in relation to the charge that on the same date and place, he assaulted O’Neil Belgraves of Town Hill, causing him actual bodily harm.

The jury was split 10-2 in its guilty verdict for Guy on this charge, while there was a 9-3 deadlocked jury, in favour of guilty, in relation to Jacobs and George.

The jury unanimously found Guy and Pinder guilty of possession of one .38 Smith and Wesson revolver, serial number 331881 without a licence. They were split 10-2 in their guilty verdict against Jacobs and George.

The verdicts and division were the same on a charge that the men had in their possession six rounds of .38 ammunition without a licence.

Jacobs did not have a lawyer in the matter.