Miss SVG to use reign as anti-bullying platform 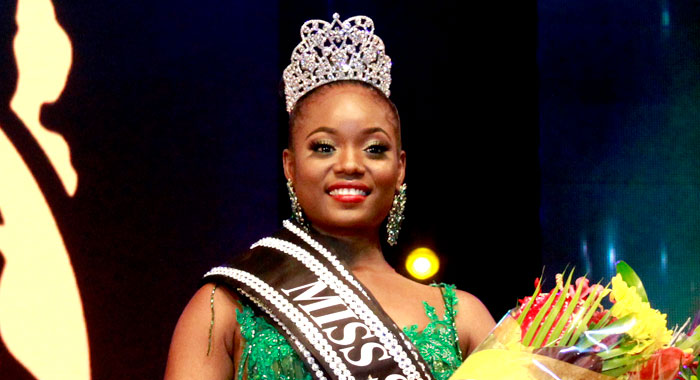 Miss SVG 2018, Shellisa Nanton, says she intends to use her reign to highlight the impact of bullying on young persons.

“I have been advocating throughout the pageant for being a voice against bullying. I think I still want to continue to do that. I am hoping that I can evoke that positive change among youth and adults as well,” Nanton told iWitness News on Tuesday, day three of her one-year reign.

The 23-year-old beauty, who is originally from Overland but lives in Georgetown was yet to come down from the euphoria of her victory over the six other contenders for the crown and the university scholarship that comes with it.

“Oh my gosh. I cannot put words to how I am feeling right now. I think I am still in awe. I am very excited right now. I am looking forward to what the year has to bring,” said Nanton, who was Miss Lotto in the pageant.

Nanton, a customer service representative at Argyle International Airport said that she chose to advocate against bullying because of her own experience.

“Growing up, it was very difficult for me, not only in school, but where I lived as well. People around would bully us — my sister and myself because we were not as financially stable as other people in the village,” she said.

She said that their financially-disadvantaged position was “pretty evident, especially when I was going to school because I could not afford certain things like the other kids and I was not dressing the same so they felt like I was different.

“So it was very hard for me and I think that because of that, it kind of affected me in terms of social development.

“In school, I was very awkward and quite reserved. I was afraid that people would not want to be my friend and all of that so it kind of hindered me from taking opportunities because I was deeply afraid of failure,” said Nanton, who achieved her primary school education at the Tourama Primary School before going on to Thomas Saunders Secondary School in the nation’s capital.

She said that the issue of bullying “is something very personal and it is something that I am very passionate about because I know how it feels and I just wanted to share my story and hoping that if other people are being bullied as well — be it for financial issues or because of their appearance or religion or gender or whatever it might be, I just want them to know that you do not have to listen to people.

“You can achieve your goals and you can be successful.”

Pageantry as escape from bullying

Nanton said she has always had a love for pageantry and had been competing in pageants since primary school.

“And it was actually my escape, funny enough,” she told iWitness News.

“Who would think that someone who was being bullied would want to go on stage? But that was the only time I felt pretty; I felt good about myself and for once people were actually noticing me and I wasn’t invisible anymore. So that was my happy place — competing in pageants.”

She competed in a pageant in primary school, but her first “official pageant” was Miss Garifuna in 2010, which she won, Nanton said.

She then went on to place second runner-up in the Miss Unity Youth pageant.

A promise to mom

But she had long promised herself and her mother that she would enter the Miss SVG pageant, and 2018 was the year that she decided to do so.

“It was something that I always wanted to do…” she said adding that she feels the show gets better every year.

“And, coming from a poor home, I wanted to secure a future for myself and help provide for my family because I know they have made a lot of sacrifices to help me fulfill my dream and I wanted to give back to them and I know the Miss SVG Pageant would have given me an opportunity to do that and also to do something that I love,” she said, referring, indirectly to the EC$80,000 university scholarship given to the winner.

Nanton told iWitness News that her experience participating in the show was “exciting, thrilling, and nerve-racking.

“For me, it was extremely difficult,” she said, adding that contestants worked very hard.

“It was very hard for me to find time to train and spending time with my family was out the window; that was not happening.”

As a Georgetown resident who works at AIA, it was difficult for Nanton to find time to go to Kingstown for training.

“The travelling back and forth was really taking a toll on my body and mentally as well, I was crashing,” she said, adding that she had to make the sacrifice of renting a place in Arnos Vale for three months.

“So that meant I had to be away from my mother and my sister and I have never been away from them for that long. So it was very hard for me. I felt a bit isolated because I have always been with my sister and my mother.”

In defence of pageants

Nanton said that while she is a customer service representative at AIA, she is a licensed nursing assistant.

“And I love nursing;’ I love the medical field. It is something that I have always been enthusiastic about. I am fascinated by the human body and I would like to pursue my studies in health sciences,” she said, adding that she hopes to begin her degree next year at the University of the West Indies.

“I know it is a huge jump from nursing, but I think that with the degree it can offer opportunities in the medical field and it is a way of me giving back to my country as well.”

She offered this advice to persons contemplating entering the pageant.

“I would definitely encourage them to go for it. The Miss SVG pageant is one of class and it is well structured. It creates a lot of opportunities and you also get the opportunity to advocate for your cause. It is a part of our culture and I think it is an amazing experience.”

And to those who think that pageants such as Miss SVG are exploitative and have no place in a modern society, Nanton said:

“Not at all. The theme this year was women who empower and I believe that we delivered just that. We went out there, put ourselves out there, we advocated for causes and we spread a message of love and harmony and I know that we were able to touch a lot of lives and hopefully evoke positive change and I hope they can overlook the whole thing that they have going on about the show being degrading. Not at all, because if you look at me, I was bullied as a child and because of pageantry, I was able to empower myself, believe in myself, and push myself forward to achieve my goals. And I am absolutely sure that this pageant can do the same for many of our islands’ young ladies.”