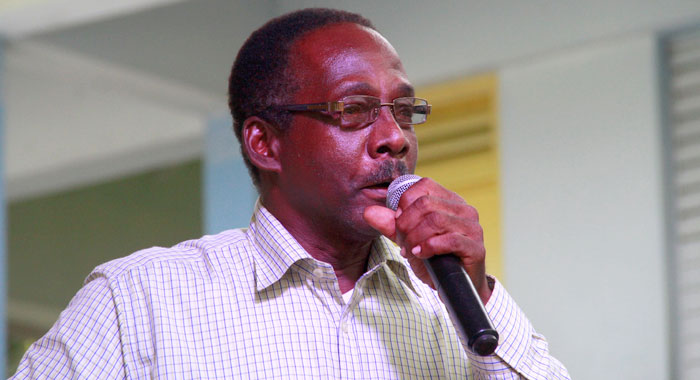 The ruling party in Grenada, which had made a clean sweep of the polls three times, has shared its winning strategy with the main opposition New Democratic Party (NDP) in St. Vincent and the Grenadines.

Anthony Boatswain of Grenada’s New National Party (NNP) told the 40th convention rally of the NDP in Greiggs on Sunday that they are sister parties not only because of their membership of regional and international democratic unions.

Bringing fraternal greetings, Boatswain gave what he described as a “brief history of the evolution” of the NNP over the past 25 years, detailing how the party had moved from electoral and close electoral defeat to domination of the political landscape in Grenada.

He said the overview was so that the NDP could “glean from our history some lessons of experience that you can also use in forging ahead when the next election comes”.

Boatswain, who is deputy speaker of the lower chamber of Grenada’s national assembly, said that in 1990, under the leadership of Keith Mitchell, the NNP’s current political leader and Grenada prime minister, the party won only two seats in the general elections.

“And everybody felt that that was the end of the New National Party. But, five years later, we won 8-7. Close, but we won,” he said.

He told the NDP rally that in 1999, the NNP felt that eight seats were not enough and they won all 15 seats.

“In 2003, and again, that’s a lesson for you, we almost lost the election 8-7 and we won by the closest of margins, six votes, in the constituency of Carriacou.

“And again, it speaks to complacency. When you have a lot of seats, you feel that you can’t lose. Beware of complacency, my friend,” he said, adding that while the NNP almost lost, it persevered.

Boatswain said that in 2008, because of “vicious propaganda” against the political leader, the NNP lost the election 11-4.

“The moment we lost, my friends, the next day, we were on the road. We were knocking doors, my friends, because we do understand that politics, political war must be fought in the streets, in the villages, my friends, hand-to-hand combat, my friends; because you must convert one vote at a time and one constituent at a time.

“Because remember you can win the majority of votes, you can have large crowds but you can lose, my friends, because of the first-past-the-post system that we have. So do not allow the crowds all the time to fool you. Win every constituency one by one. That’s how you will emerge as a winner.”

He said that because of the hard work, the NNP won all the seats in 2013.

Boatswain said that in 2014, Grenada had to introduce a self-imposed structural adjustment programme.

The programme was “designed to correct some of the economic and fiscal imbalances that we were facing; a programme that warranted that we introduce some measures that were not popular, like increasing taxes.

“Although we had given a commitment that we will not increase taxes, … the international community said, ‘If you want our support, you have to ask your people to make some sacrifice as well.’ And we did it. And many people felt that ‘Hey, that will be the end of the New National Party because look, they increase taxes.’”

Boatswain, however, said that the NNP went back to the polls on March 13 this year and made a clean sweep of the polls for a second consecutive time.

He said that some Grenadians accused the party of working obeah (witchcraft).

“You have to get them on-board. And the reason why our structural adjustment programme was successful and we were able to win the election again is because we had our social partners with us. So if you want to win, you cannot afford to leave out the social partners. Get them on board and you will win.”

He said that politics is like a rollercoaster but told the NDP to “remember that in every defeat, you will find the seeds of success.

“You just have to know how to nurture them, my friends. But, if you ignore them, then the seeds, will not grow and blossom. So defeat should teach you how to work harder, how to persevere more, my friends, and don’t feel that it is the end. Because if we had done so, we would have been history by now.”

Boatswain said that he gave up his position as a permanent secretary to contest a district that his party had never won before.

He won then and has done so three successive times since.

“And you know why? Because I keep in touch with people. I go down into the trenches.”

He said that there are some politicians who, when they are in office, their constituents do not see them and they drive around with their glasses up.

He said that he has decided that he will not seek re-election after the current term, having served as minister of finance for seven years, and also as minister of economic planning, education and human resource development, youth and sports.

“I am committed now to ensuring that we build a solid and sustainable party.

“Because we do understand well that whenever you have a party and there is a dominant leader and the leader quits the scene, that party tends to disintegrate. We do not want that to happen to our party. And I am pretty sure that you will ensure that your party, under the able leadership of Dr. Friday will become sustainable and go beyond the present crop of politicians, my friend.”

Referring to the NDP’s symbol and the slogan of the rally, Boatswain said:

“You have with you the key. You say you are ready. Use that key to open the doors of success, my friends, and you will be the next party in government.”

He said that the Keith Mitchell headed NNP “is Vincy by birth”.

“Those of you who may not know that, our party was born on Union Island in 1984 and the chief midwife, it might sound sexist, but the chief midwife was no other but your great Sir James Mitchell who ensured that the New National Party became a reality,” Boatswain said.