NDP apologises for late removal of portable toilets from school 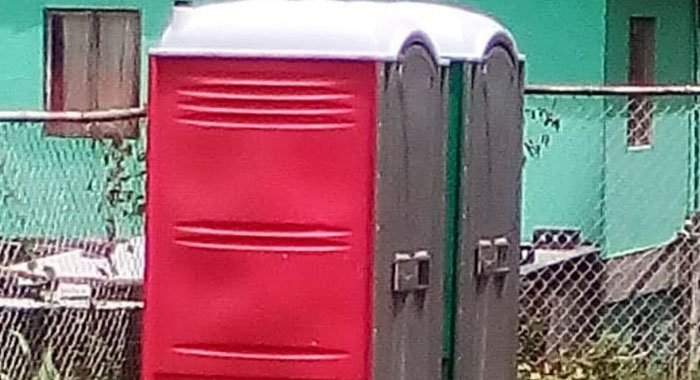 The portable toilet, seen in this photo, were removed from the school on Tuesday, after the NDP learnt that the company had not done so, as agreed. (Photo: Facebook)

The main opposition New Democratic Party on Tuesday apologised for the delay in the removal, from the Greiggs Primary School, of two portable toilets that were used during their rally there on Sunday.

Reports are that the head teacher at the school, Margaret Lewis-Jackson, sent the students and staff home at noon after they could no longer cope with the stench.

The NDP, in a statement Tuesday night, said, “Unfortunately, at the end of the convention the portable lavatories were not removed from the premises as intended.”

The party added: “It is being suggested, by some who should know better, that this lapse to which the early closing of the school on Tuesday was attributed, was intentional.”

The NDP, however, said that this is “far from the truth”.

“There is no political party in SVG that is more concerned about the welfare of our students and teachers than the NDP,” the party said, adding that the private contractor with which it had an agreement to remove the portable lavatories did not do so.

“… and for this the party takes full responsibility and apologises unreservedly for the resultant inconvenience.

“Nevertheless, as soon as this situation was brought to the attention of our leadership, the portable lavatories were removed forthwith.”

The NDP said that there was “a malicious attempt” by a few supporters of the ruling Unity Labour Party “to bring our party into disrepute, by highlighting an unfortunate situation that has since been remedied”.

The party said that Greiggs and the school where the convention was held hold  “significant historical significance for the NDP:

“In the early years of the NDP, Greiggs sheltered our founding father, Sir James Mitchell, when his life was threatened by political rivals, and the school, built by an NDP administration, remains a model institution of which we are justly proud.”

The NDP said that prior to Sunday’s convention, the NDP power washed the school twice, not just for its event but also to give the school “a much-needed face-lift”.

“Similarly, our candidate for the area, Israel Bruce, recently power washed the Greiggs Clinic that was covered with mould. Those are the actions that reveal the true love and care the NDP feels for the Greiggs community and are the kind that one would expect of an area representative.”

It said that all throughout last year, several schools had to be closed because of leaking toilets and roofs under the current “incompetent” ULP administration.

“The NDP, meanwhile, continues to be the party with the best interest of our students and teachers at heart,” the NDP said.