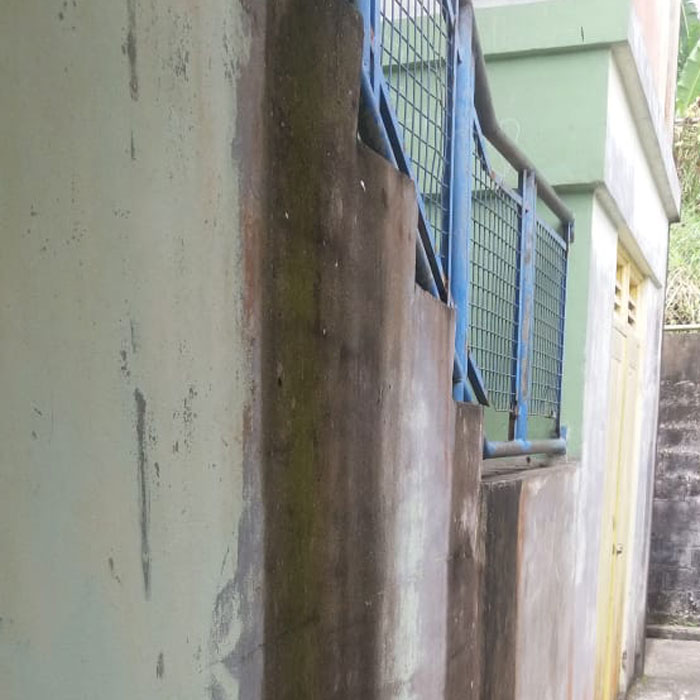 An outer wall near a flight of steps at the school. (Photo: Israel Bruce)

Opposition politician Israel Bruce says he took and published on social media, Wednesday, photos of the disrepair at Greiggs Primary School because persons were being “unfair” to his party.

Bruce aspires to become parliamentary representative for South Central Windward, where the school is located.

The New Democratic Party (NDP), for which he is a candidate, on Tuesday, apologised because a contractor had not removed two portable toilets from the school after the NDP’s convention there on Sunday.

Students at the state-owned school were sent home at noon on Tuesday, reportedly because of a smell at the school.

But, on Wednesday, the students were sent home again, this time, reportedly because of four large bags of garbage that remained on the compound and the “stench of chicken water”.

Bruce, however, told iWitness News, that while he had noticed the condition of the school before the convention on Sunday, he had agreed with the head teacher that he would bring a team to help repair plumbing and power-wash the facility.

He said that, in light of this agreement, he decided not to mention in his speech at the convention, the conditions at the school.

“The ULPites started to peddle in social media to get their newspaper to publish that ‘NDP went out there to use the school and NDP don’t care about the children and their education, NDP don’t care about the facility, NDP this, NDP that’, and so, you castigate the organisation, because two persons who were supposed to take on two simple tasks that could have been completed in five minutes, both tasks in five minutes’ time, didn’t do it,” Bruce told iWitness News of the reaction on Tuesday to the news that the portable toilets — which would be removed later that day — were still at the school.

He said that the NDP had arranged for someone to dispose of the garbage after the convention, but this, too, was not done.

Persons have raised questions about why the management of the school waited until Tuesday, to highlight the fact that the portable toilets were not removed.

They further noted that the management of the school reportedly said nothing about the garbage when they lodged their complaint with the NDP on Tuesday, but sent the students home again on Wednesday, allegedly because of the garbage and a stench on the compound.

Bruce said it is “impossible and improbable” that the management of the school tried to reach him by phone on Monday, as allegedly claimed.

He told iWitness News that as a legal practitioner, he returns every call, “even if the call comes from Timbuktu, because I never know when it is a big case that I am being called on.

“I did not have no missed calls [on Monday], so I realised that somewhere, members of the staff and the political activist in South Central [Windward], they colluded to engage in that exercise. And to me, if you decide to go that way, then let the nation see the state of the school in its general aesthetics,” he said of his decision to take and publish the photos.

He said that, at the school, he saw faucets in dilapidated condition, broken plumbing, and moss on the inside and outside surfaces of the faucets.

“In washrooms, you can see the state of discolouration on, for example, the urinal and the bathroom, which tells you that cleaning has not been happening on the regular basis to avoid the discolouration of those walls.”

Bruce said there is “gross discolouration on the walls, which tells you that for years, this building has not had any facelift.

“You look into the roof of several parts of the school, inside on the celling, you can see the purple and, in some cases, turning brown, which tells you that cleaning has not been done at the school.

“You can see the cobwebs, which tells you that no proper cleaning has been happening at the school and over an extended period, because it can’t be since Sunday when the NDP went there for the convention that those things went there.

“And let me tell you, there are four water tanks at that school. Three of them are totally uncovered.  So insects, small animals, possible manicou (opossum), iguanas, can fall inside the water tanks and rot inside there and the children, when they go to the washroom, whether they wash their hands or they wash their face, it goes into the mouth, they have no clue as to what they are ingesting when they use the water.

“And the people who are pretending that they love or care for these children have not done anything to that and I wanted the nation to see it.”

Bruce said that since the NDP’s focus was on using the school for the convention, his team had inspected the restroom to make sure that the toilets and face basins were functional.

“Some of them were operating properly and some of them were not. In fact, I had given an undertaking to the principal that I would have gotten a qualified plumber to come in and assist in that regard and to even assist with some painting,” he said, adding that the school had indicated that it had some paint on the compound.

He said his team spent two days power washing the hard-court at the school.

“The moss had gone from green to black; the drainage pipe was blocked up, so every time a little rain came, the entire hard-court was flooded. We cleared the drainage pipe,” he said, adding that some of the stench on Wednesday was from the erstwhile contents of the drainage pipe.

“They were not fair and they tried to castigate the party,” he said of “the people who had indicated to the ministry that they were getting odour from chicken water and who knew this was not the case.

“We were there all day [Sunday] in the hot sun. It was not possible for there to be chicken water caught in that drain in the hot sun and the delegates there not picked the odour up.”

Asked if it was a case that he had decided not to try to gain political capital from what he had seen at the school ahead of the convention, Bruce said:

“The political capital for me was to take a positive road. As I said, we had given an undertaking to the principal that I would return with some Young Democrats, we’d assist with some areas that need painting … and we were planning to go back to power wash where they (students) go to drink the water, because that is a project that was done by a teacher for her management in education programme.

“… but when they decided that they wanted to play nasty politics and create the impression that we are so irresponsible in the way we went about things, I had to expose them to show that the extent of the irresponsibility lies with the Unity Labour Party by mismanaging that particular facility,” Bruce said.

Bruce also said that the Teachers’ Union has members who work at the school and the union, too, “must also look out for their teachers and the children. It should be of interest to the Teachers’ Union and they should go to that facility and call out the government and Saboto Caesar as the parliamentary representative.

“Because I saw where they said on some kind of trash news the parliamentary representative contacted CWSA to come and power wash and to move away garbage.

“That was not done and it was not needed. I know when you see all of that that they’re just playing politics.

“Why didn’t he call CWSA to power wash the clinic in Greiggs? Why he ain’t call in CWSA and the Ministry of Health to deal with all the mould that was slowly killing people who visited the centre in Greiggs?

“Why isn’t he calling in the Ministry of Works to deal with the woodlice that is eating down the building? He needs to represent the constituency and I said on Sunday it is colossal laziness and stop trying to score cheap political points. I’m not going to have it; I’m not going to allow him to do it,” Bruce told iWitness News.