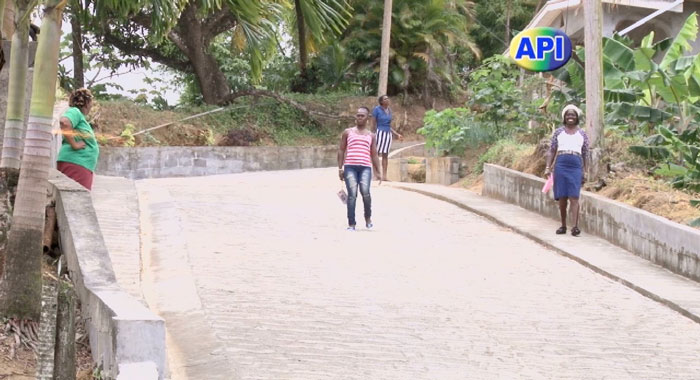 Persons walk on the road in Lauders on Monday. (Photo: API)

Residents of Roseau, Lauders Community say they are pleased with the completion of a 650-foot-long village road, noting that it has significantly enhanced access to and from the community.

Villagers, principals, staff and students of the surrounding schools joined Area Representative Saboto Caesar and other Cabinet members outside Vincyfresh’s headquarters for the official opening ceremony on Monday.

The Caribbean Development Bank (CBD), Basic Needs Trust Fund (BNFT), and the Government of St. Vincent and the Grenadines made the completion of the road possible.

Project Manager of the BNTF, Dunstan Johnson, noted that the BNTF’s projects continue to impact the lives of the poor, vulnerable, and marginalised.

Delivering the feature address, Prime Minister, Ralph Gonsalves, explained that the road was needed for years and plans for its construction commenced under the leadership of former Area Representative Selmon Walters.

Gonsalves said Abacus Inc. was responsible for the design of the road and Cyril Jack of Jack’s Construction Services, for its construction.

He noted that the 14-foot-wide Roseau, Lauders village road provides access to around 50 farmers and members of 10 households.

The minister explained that the road started with a policy to make farms more accessible, adding that it would also benefit residents.

He spoke of the challenges farmers and residents faced prior to the completion of the road, where their mobility was disrupted, especially, when it rained.

He said that “all those days are gone”.

Mary Matthews, a resident living alongside the newly built road, said she has been living in that community since the 1990s and had long anticipated the completion of the road.

Matthews expressed happiness that the road has been completed. She thanked Caesar, the BNTF and Prime Minister Gonsalves for making the road a reality.