‘Help is on the way,’ Friday tells farmers 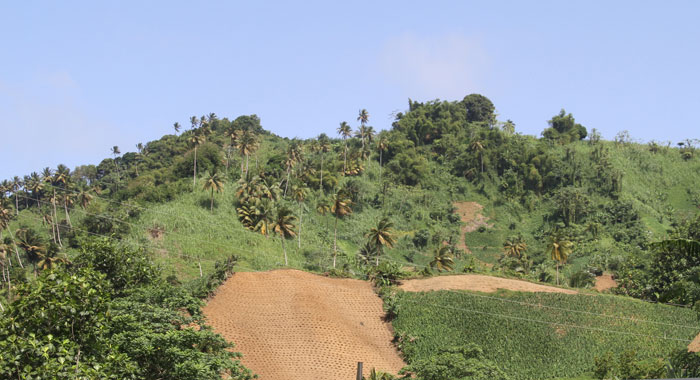 Farms near to where the rally took place in Greiggs on Sunday. (iWN photo)

Help is on the way for the farmers of St. Vincent and the Grenadines, Leader of the opposition Godwin Friday says.

He told his New Democratic Party’s 40th convention on Sunday in Greiggs, an agricultural village, that in 2000, before the Unity Labour Party (ULP) came to power, the banana industry was operated and managed by Vincentian farmers and banana exports contributed EC$28 million dollars to the nation’s GDP.

“Since taking over government, the ULP government essentially took over the management of the banana industry from the farmers,” he said, adding that the industry’s contribution declined “to less than EC$1 million, and probably even less as we speak.

“In other words, the banana industry in SVG is dead! The people in this part of the country know it better than anyone else because who feels it knows it,” said Friday, who is also president of the NDP.

“It did not have to be that way.  Look at St. Lucia, where the management of the banana industry remained in the hands of farmers and the industry is growing and doing well.

“This shows that our banana industry, which was one of the largest productive sectors in this country, was killed by the incompetence and mismanagement — some say spite — of the ULP government.

“The result has been painful, especially for farmers,” he said.

Friday said that he recently heard a farmer speaking on NICE Radio about the state of the industry.

“He was passionate and eloquent, as he spoke about the plight of fellow farmers in the country.   And he was also right!  He was right when he said that farmers have held up their end of the bargain the government presented to them; they have worked hard and produced good banana to bring to market. But, the government has let them down; it has not held up its end of the deal.

“Black sigatoka, as you know, was left to cause havoc in your fields.  Post-Hurricane Tomas relief was given out like charity, mainly along party lines, rather than on the basis of personal need and the requirements for recovery of the industry. Credit has dried up.  Fertilizer is beyond the means of most farmers.  The government has left farmers to struggle and fend for themselves.  Many have simply given up,” Friday said.

“What a difference a government makes! This area of the country, under [Sir James] Mitchell’s leadership was the focus of a government land reform programme that made farmers owners of land and gave them the means to develop themselves.

“Today, the government says nice-sounding words to you, but in reality you know they have left you on your own.  Even if the Minister of Agriculture [Saboto Caesar] comes from your area, this area, it makes no difference. Because he has no say.  You are on your own. “This is one reason why the people of South Central Windward need Israel Bruce as their representative. He will deliver,” Friday said, referring to the NDP’s candidate for the district in the next general elections, constitutionally due in March 2021.

“But I say to you farmers, hold on.  I promise you, help is on the way. Let us change things in government and together we will change things on your farm. You have suffered too long.  I have heard your cries and feel your pain.  The NDP will help.   We know you are not looking for handouts or party favours.  What you want is a government who cares about you and believes in you.  I pledge to you that you will get that and more from me, from Israel Bruce and an NDP government.”

Friday said that such a commitment should not be news to farmers.

“It is in keeping with how I have said we would govern and manage development in this country. This is why we hold consultations and town hall meetings with various sectors of society—with young people through our innovative youth dialogue; with farmers in Fitz Hughes and elsewhere to talk about the problems in agriculture. We will continue and increase such consultations, with fisherfolk, trade unions, health workers and teachers, van drivers/operators.  Your input will shape our policy going forward,” Friday said.

The opposition leader also used the speech to comment on the general state of the Vincentian economy.

“If you need any reminder of how badly the ULP way has failed us, simply reflect on the poor performance of our economy over the time they have been in power,” he said.

Friday said that the International Monetary Fund said in its December 2017 report that economic growth in SVG has been stagnant since 2009, at an annual average of 0.2 percent up to 2016, and the future does not look much brighter.

“The unemployment rate in our country stands at 25 per cent (IMF again). This is worse than it was in 2001, when the ULP came to power. At that time, it stood at 20.9 per cent.  Today, the youth unemployment rate is estimated to be a staggering 46 per cent.”

He further said that the national debt has gotten much worse.

In 2001, SVG’s debt-service ratio was below the Eastern Caribbean average.

“Today it is higher than that average.  In fact, it is the highest in the Windward Islands and the highest in our country’s history,” the opposition leader said.

He said that government has engaged in massive public spending “without accountability” and has “imposed an oppressive debt burden on taxpayers, with little benefit to them.

“Our people are paying more taxes every year to pay the growing government debt and are getting less for their sacrifice.  Our country now has the highest taxes and the lowest wages in the OECS.  Ralph Gonsalves and the ULP have taken us to the bottom of the OECS, while boasting and bragging all the way in their lies about the economy,” Friday said.

11 replies on “‘Help is on the way,’ Friday tells farmers”