Police admit to sloppy investigation of death threat against journalist 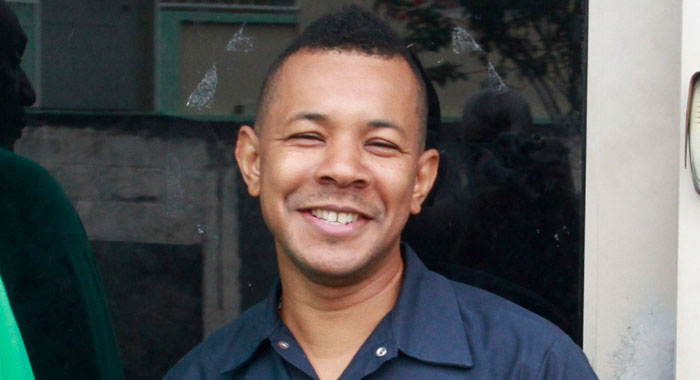 Journalist Lyf Compton, seen here leaving the Kingstown Magistrate’s Court on Monday, told police that a woman told him she would have a man kill him. (iWN photo)

Police, on Monday, admitted to the Kingstown Magistrate’s Court that their investigation of a report of a death threat against a journalist was not in keeping with policing norms.

Senior Magistrate Rickie Burnett will rule on Tuesday on whether the trial should continue in the case in which Shanet Williams, of Layou, who is charged with threatening journalist Lyf Compton, of Gibson Corner.

Williams is charged with using threatening language against Compton in Kingstown on Oct. 20, 2017.

She is alleged to have told the Searchlight reporter,“Wait ’til Coco come out. Yo’ go see. Ah go mek he kill yo.”

Wright told the court that he knows Williams well as she has visited her fiancé, Colin “Coco” David, of Kingstown, when he had been in police custody at the Central Police Station.

The corporal told the court that sometime after receiving Compton’s report, he saw Williams enter the police headquarters.

He said she was going to the Criminal Investigations Department (CID) to take food to David.

Wright said he told her of the report and after making a conversation with her, he warned her regarding the statements about which Compton had complained.

The officer further told the court that he advised her to make a report there regarding her claim that Compton had told her that he would shoot her with his licensed gun.

Wright told the court that the matter was submitted to his superiors for further instruction but he has no knowledge of Williams making a report to CID nor was he contacted by CID regarding any such report.

During cross examination, Wright said that Compton did not say in his report to the police that he had told Williams that he would shoot her with his gun.

Compton also admitted in court that he had told the woman so after she said she would have stabbed him if she had a knife.

The police officer further said that Compton did not say that he had called Williams a “demon”, an allegation that Compton denied in his testimony to the court.

The corporal said that it is normal to take a statement from an accused person but said that at CPS “there are peculiar circumstances” and none was taken from Williams.

Wright said he was the recording officer, but not the investigating officer in the matter.

He explained that at the CPS there are designated officers who investigate matters reported to the station.

In his testimony, the investigating officer, PC5 Matthews, told the court that he “conducted further investigation” into the report made by Compton.

During cross-examination by defence counsel Roderick Jones, Matthews said he did not speak with the defendant at all and admitted that the matter had proceeded to trial based solely on Compton’s report.

Matthews, who said he has been a police officer for more than 10 years and considers himself a seasoned investigator, said the manner in which he conducted the investigation was not the norm, but that he acted based on the instructions of his superiors.

“But I want to know, officer, why did you depart from the norm on this matter? Is there a reason other than saying you were instructed?” Burnett asked.

The officer said he had done so “based on the records that were shown”, adding that Compton was always being threatened.

Matthews, however, told the court that he had no reports of Williams ever threatening Compton before.

At this point, prosecutor Police Constable Corlene Samuel told the court that that was the end of the prosecution’s case.

The magistrate told the prosecutor that he had heard what she said but had also noted her body language.

The prosecutor told the court that she was not satisfied with the manner in which the investigation was conducted.

The magistrate said he felt sorry for PC Matthews, who he said was only named investigator in court.

“That’s not how matters are to be done, regardless of who the parties are. There must be one way for all. I keep seeing that in cases now,” the magistrate said.

He then asked the prosecutor if she thought that the case should continue.

Samuel told the court that while there are some issues with the manner in which the investigation was conducted, she believes that something happened between Compton and Williams that day.

She said that Compton had reported the matter to the police and how they handled it is not his fault. She said she would leave to the court the decision on whether the matter should continue.

But Jones told the court that the prosecution has certain responsibilities, chief of which is that they must prove their case beyond reasonable doubt.

He said that the only way this would be done is if the prosecution carries out a thorough investigation.

“What is before the court is a case presented only on evidence of the virtual complainant,” Jones said.

He argued that the police had concluded that the defendant was guilty and not worthy of having her version of the events recorded.

He said that the justice system is premised on the appearance of justice, adding that the system had failed the defendant.

The lawyer invited the magistrate to discontinue the case.

Not yet at that stage

However, the prosecution argued that the case was not at yet at the stage where a determination should be made regarding whether the prosecution’s case was proved beyond reasonable doubt.

Samuel said that if a reasonable tribunal listens to a matter and might convict, the matter must be allowed to go forward.

She argued that Williams had a conversation with Compton and had told him something.

“The prosecution is saying that we have brought evidence to show that something happened and the virtual complainant reported it and we are asking that we go forward,” she told the court.

She said that the investigator should have done certain things, but proceeded instead by way of summons.

The prosecutor said that proceeding by summons had “not exactly” changed anything.

The magistrate told the parties that despite his “reaction to obvious things before me” he still had to reflect on the case before giving a decision.

He set Tuesday for his ruling.