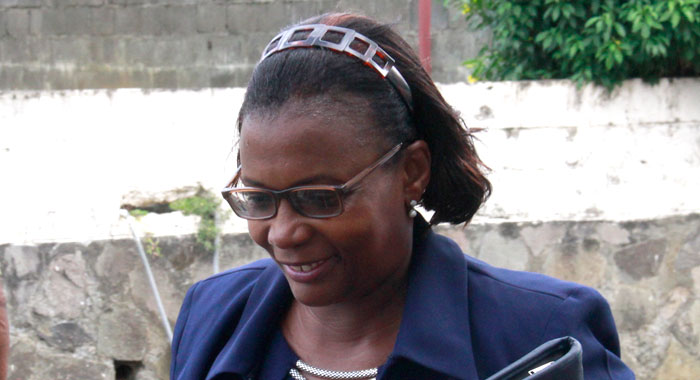 Dr. Karen Providence, registrar at the Mental Health Centre, arrives on Tuesday at the Kingstown Magistrate’s Court, to which she had been summoned. (iWN photo)

“When you vilify mental health professionals, people are afraid to seek help and you have people committing suicide,” she told the Kingstown Magistrate’s Court on Tuesday.

Providence said that no doctor would give medication to a mental health patient without first determining that the medication would be beneficial to the patient.

Providence, speaking at the Kingstown Magistrate’s Court to where she was summoned on Tuesday, said that when the centre is demonised the nation would see what has occurred over the past few weeks.

She was speaking about the three suspected suicides, two of which were by young persons, including a 15 year-old student on the weekend.

Senior Magistrate Rickie Burnett had summoned the doctor to court to explain why the court was yet to receive reports on three patients who were sent for 14 days observation on April 9, April 30, and May 2.

Providence said that while she was not trying to absolve the centre, there are a number of challenges affecting how it does its work, including the fact that there are only two doctors to treat 200 patients.

She said it is unacceptable for persons to go on Facebook and make inflammatory comments about the Mental Health Centre.

She suggested that the centre has problems and difficulties attracting or retaining doctors.

Providence said that there were interning doctors who were excellent at mental health care.

“Now, do you think they want to work there?” she said.

The doctor said that culture is important in treating mental health conditions, adding that when one looks at the marijuana being grown in the hills, she knows what is going on because she was born in Troumaca.

She said that when she joined the staff at the MHC, there was a Mental Health Association.

That association used to have end of year events for which tickets were by invitation only and it was an honour to secure a ticket.

The doctor said that it has been more than 10 years since the association has held an event, and its funds have been depleted.