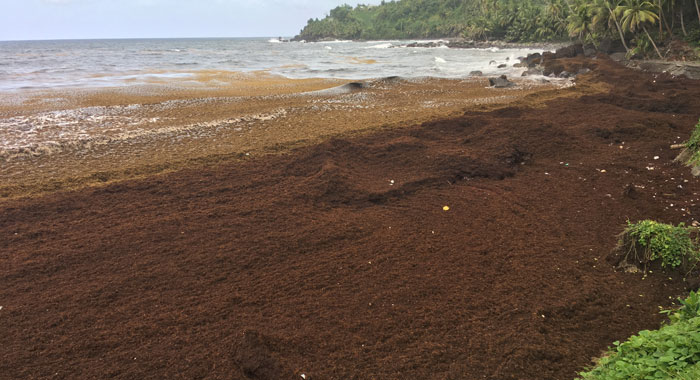 The beach at Boat Bay, a turtle nesting site, in North Windward, is under several feet of sargassum. (iWN photo)

A beach in north-eastern St. Vincent is currently covered with several feet of sargassum, raising concerns about the implications for turtles that nest there.

When iWitness News visited Boat Bay, near Sandy Bay, on Monday, the sargassum had covered the entire beach and the deposits were several feet into the sea, affecting even the wave action on the rough beach.

A man there said that he works to ensure that turtles are not killed or in any way affected by human action when they come ashore to lay.

He said that when turtles arrive at the beach to find it littered with the seaweed they go back out to sea.

He was unable to say how the situation might ultimately affect the turtles’ nesting efforts.

In the nearby village of Owia, there was large deposit of the seaweed in the bay there, making it difficult for fishing boats to manoeuvre.

Villagers must also contend with the stench of the rotting sargassum.

The sargassum is affecting tourism, fishing and recreation across the country, but especially on the eastern coasts of the island, which face the rougher Atlantic Ocean. The issue was on the order paper of last week’s meeting of Parliament in the form of a question from Member for the Southern Grenadines, Terrance Ollivierre.

The opposition member noted that the sargassum seaweed is adversely affecting numerous beaches and bays around St. Vincent and the Grenadines, saying that that was especially the case in Clifton Harbour, Union Island, Spring, Industry beaches and Paget Farm Bequia and other popular beaches.

“It is posing a serious threat to our tourism and to public health because of the pile up at the beaches and harbour and the stench which emanates from the rotting seaweed.

In response, Minister of Fisheries, Saboto Caesar said that Cabinet has set up a “Seaweed invasion task force” and a report, “Management of Extreme Sargassum on the coast of SVG” has been submitted by the Fisheries Department.

Caesar said that since 2011, from March to August, there has been a significant increase of sargassum arriving on the coast of SVG and of other Caribbean islands.

He said that the floating masses of sargassum also play an important role for areas of nurseries for juveniles of more than 100 species of commercial and recreational fish, including jacks, tuna, barracuda, dolphin fish, and bill fish.

“The problem, Mr. Speaker, is when this seaweed is trapped in our bays, is on our beaches, and it is affecting hotel sand, guest houses and citizens.”

He said that in SVG, mounds of sargassum have accumulated along principal bays and piers and, in some cases, have completely covered entire beaches.

“The offensive odour emanating from the sargassum has affected beach goers as well as guest at hotels in St. Vincent and the Grenadines — in Bequia and Union Island, especially.

“… from Stubbs to Fancy, these areas are significantly affected on the windward side.”

He said that the sargassum is affecting fisherfolk because it causes significant problems when entangled in propellers.

A multi-ministerial approach has been adopted, and, as it pertains to implementation, there is a committee headed by the fisheries division.

It also includes the Ministry of Agriculture, Transport and Works, Tourism, Health and Wellness, and Housing, as well as BRAGSA, and the Department of Grenadine Affairs, the Solid Waste Management Unit, the Tobago Cays Marine Park and fisherfolk organisations.

All entities affected by the extreme accumulation of sargassum, whether hotels, business, civic groups should notify the Ministry of Agriculture, Health or Tourism.

“Mr. Speaker, we are following this issue. I have seen the closure of hotels and guest houses in Barbados in some areas and we will do whatever it takes to ensure that we address the problem here in St. Vincent and the Grenadines.”

He urged affected persons or entities to report to the various ministries to trigger the response.

The minister said that a company from St. Lucia will bring to SVG the technology for utilising sargassum to make “valuable fertiliser”.

“So that when we mobilise and we remove the seaweed, we can take it somewhere and we can properly utilise it.”

He said some 300 farmers in St. Lucia and 100 in Bequia are using the company’s flagship product.

“Some farmers have already started to use it and the ministry will provide further guidance on the methods for utilising the seaweed.

“It is definitely a problem, I have seen the impact, especially in Union Island and Bequia and we are definitely going to ramp up our efforts as to how we can mobilise community groups and NGOs as to how we can ramp up the effort in the government to address the issue.”