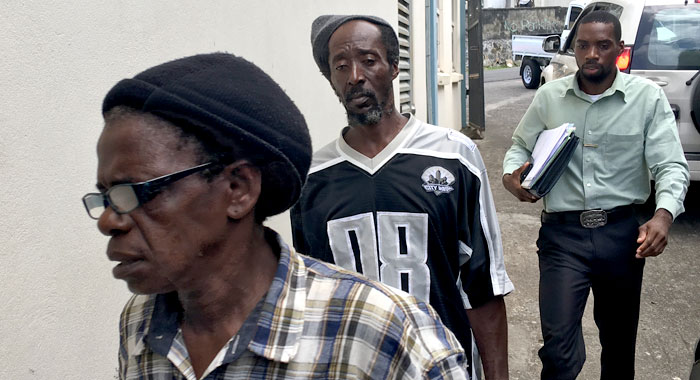 Two days after being discharged on attempted murder and arson charges because police misplaced evidence in the case, the parents of popular former model Yugge Farrell were, on Friday, back in court again charged with the same offences.

Her decision came after the prosecution said they had been informed that police could not find the DVDs to which they had burnt the video interviews they had conducted with the accused.

The couple, which had been granted bail, had been waiting since last November for the commencement of a preliminary inquiry into charges that on Nov. 1, 2017 at Lowmans Bay, they attempted to murder Edward Durrant, a fellow villager.

They were also charged that without lawful excuse, they destroyed Durrant’s 12 feet by 16 feet wood and concrete house by fire and were reckless as to whether such property would be destroyed.

The preliminary inquiry was scheduled to begin last Wednesday, after several adjournments. However, they were discharged on Wednesday after the court was informed of the development.

But the couple was taken into custody Friday morning, where they were, again, slapped with the same charges.

When they appeared at the Serious Offences Court Friday morning, Browne-Matthias granted bail on the same conditions as she had done last year, but this time, did not order the couple to report periodically to police.

Bail was set at EC$30,000 with one surety. The couple was ordered to surrender their travel documents, stop notices were placed at ports of entry and exit, preventing them to leave the jurisdiction, and they were also ordered to seek the permission of the court to leave St. Vincent and the Grenadines.

Senior Prosecutor Adolphus Delplesche told the court that everything was in place for the preliminary inquiry to begin as soon as Monday.

Defence counsel, Grant Connell, told the court that he still wished to proceed by way of paper committal.

“They have the DVDs?,” he asked in a somewhat mocking tone of voice.

The prosecution told him that the DVDs were accounted for, and everything was in place for the preliminary hearing to begin.

The parties agreed that the hearing would take place on Monday.

The couple is parents of Yugge Farrell, who made national headlines earlier this year after being charged on Jan. 4 with using insulting language to Karen Duncan-Gonsalves, wife of Finance Minister Camillo Gonsalves the previous day.

The 22-year-old former model claimed that she was the years-long lover of the finance minister.

It is alleged that on the day that Yugge reportedly committed the offence against Duncan-Gonsalves, she also delivered to her a “blackmail” letter asking, among other things, that the charges against her parents be dropped.

Yugge went on to spend three weeks in a psychiatric hospital after the court granted an application by the prosecution, given in the absence of any supporting evidence that she warranted being sent for psychiatric evaluation.

It was later revealed that Farrell had a history of mental health issues.