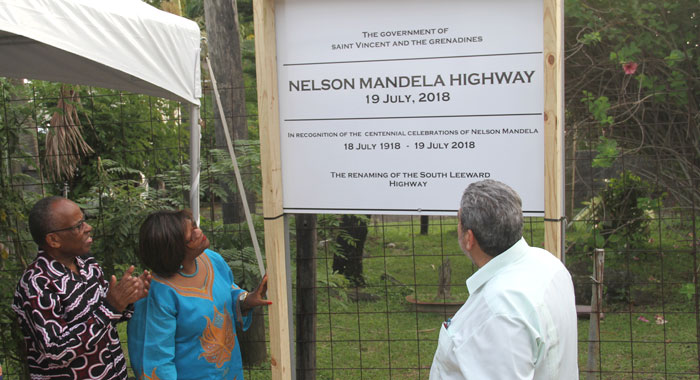 The South Leeward Highway was, on Thursday, officially renamed the Nelson Mandela Highway during a ceremony in which the Xoliswa N. Ngwevela, high commissioner of South Africa to St. Vincent and the Grenadines warned against what she said was a growing narrative that the deceased freedom fighter was a sell out.

The ceremony saw the five-mile stretch of the main road between the Milton Cato Memorial Hospital in Kingstown, and the service station in Cane Grove being formally renamed.

Minister of Works, Senator Julian Francis told the ceremony in Chauncey that the event doubled as the official opening of the highway, which was recently rehabilitated, but still has some work to be done.

The work included the fixing of the portion of the road between Gibson Corner and MCMH, where potholes continue to re-occur and the consultant seems to be having challenges with coming up with a long-term fix, according to the minister.

Speaking at the ceremony, which came one day after the 100th anniversary of the birth of the former South African president, Ngwevela said that Mandela is a hero and icon that South Africa doesn’t own.

Nelson Mandela belongs to the world, she said of the freedom fighter who spent 27 years in prison as a result of his efforts to rid South Africa of the oppressive Apartheid system, then went on to become the nations first black president.

She said that when Mandela retired in 1999 — after one term as president of South Africa — she was the consul general to New York.

Shortly after Mandelas retirement, he went to New York at the invitation of a powerful Jewish lobby group in the United States, Ngwevela said.

During the visit, he addressed some groups and the event was to culminate at a gala dinner in Washington, D.C., where Mandela was scheduled to speak.

The diplomat said that during New York event, Mandela was warmly received and everyone spoke in glowing terms about him.

This group said they are very happy that Mr. Mandela was there because they are hoping he would play a very positive role in the Middle East conflict. And that is the reason he went there  — because he thought he could influence what was going on in the region.

Ngwevela said that after one or two meetings, a gentleman came to Mandelas hotel room asking to have a talk with him.

“They were not quite too happy with the last two speeches that Mr. Mandela made. And they are being delegated by their delegation — Can you tone it down on the Palestinian side? she recounted.

The diplomat continued: ”There was an event, I think, that happened in the Middle East, because, as we know there is a continuous conflict going on there.

”But they didnt like the mention of the support to the Palestinians, but they would like Mr. Mandela, very much to talk about the fact that South Africa supports Israel as a state. They didnt say it in the terms that I put it but they went around beating around the bushes in a long speech, but the bottom line was that really about Mr. Mandela  making a statement about supporting Israel without the mention of the Palestinians.

”Now, what am I getting to? Ngwevela told the small audience comprised of mostly government officials, civil servants, diplomats and residents who had come out amidst the humidity and threatening rains.

She said that Mandela told the representatives that he was getting a very different view from the one he had before he went or he would not have bothered to go.

And this gentleman was insistent and then he said that, well, this is what you came here to do. I intend on doing it, I intend on standing up for Middle East peace and for the Palestinians to get justice.

She said that the gentleman, in a very indirect way, reminded Mandela about a donation that had been made to the Nelson Mandelas Children’s Fund.

”Again, not in those crude words that I am putting out here but basically, this gentleman was saying, well, we gave you so much, but now you are going to denounce us.

”And then Mr. Mandela was very calm. He called one of the officials who was travelling with him and he said, So and so, can you please make sure that when we get back home we return the donation that this gentleman gave to foundation? Can you also bring those gifts that I received over the last one or two days and please let the gentleman have them? Thank you very much.

If I cannot come here and do what you ask me to, my role is about reconciliation, it is about peace building, it is about people finding themselves and finding solutions to problems. If that is not what I am here to do, I am returning back to South Africa tomorrow.

The envoy said she told the story because ”sometimes there are some people who come out, it is a new trend that is really — I am not sure whether it is going to pick up pace, I hope it doesnt; people say Mr. Mandela is a sell out. Its a narrative that is growing out there, outside of South Africa, not in South Africa alone. But there is an international trend.

”We have got a wonderful constitution, because we were led by a man of principle, Ngwevela said, adding that a song played at the event says, The job is not done until all people are free all over the world.

“And that is the mission today. There are people who are trying to ravage the legacy. Maybe they are trying to usurp it for themselves, want to put themselves as the new, alternative Mandelas of today. And I dont think they are doing it very well.”

Ngwevela expressed thanks to the government and people of SVG for the honour that has been bestowed on Madiba — referring to Mandela by his clan name, which is used as a mark of respect.

“I always think that when we name places, this is not about simply remembering Madiba. It is about embedding the history in our mind and to embed history for generations to come. For your children and my children and great, great grandchildren to remember who Nelson Mandela was.

“Because today, I think we have new challenges. We defeated Apartheid, we defeated the Nazi-like type of Apartheid in Africa. But we have got new types of racism coming in; maybe not in SVG per se, but there is racism coming out. We read about it in the newspapers and this is the fact that that you should heed. Mandela has done his job and he is resting in peace and may his should continue to rest in peace. He left us with a wonderful legacy, and we must continue the fight,” Ngwevela said.

Thursdays event took place amidst some opposition, even among some supporters of the ruling Unity Labour Party administration of Prime Minister Ralph Gonsalves to name the highway in honour of Mandela, while SVGs sole national hero, Joseph Chatoyer is yet to have anything named for him.

Gonsalves addressed some of those views during his feature address at the event.

In the lead up to the renaming of the highway, there was also an announcement that on Aug.1, Emancipation Day, the Rabacca Recreational Park will be renamed the Joseph Chatoyer Recreational Park.

Thursday’s naming ceremony was part of activities locally to mark the centenary of Mandelas birth.

On Monday, Minister of Health, Wellness and the Environment, Senator Luke Browne presented a lecture on the topic Renewing the Mandela Legacy and Promoting Active Citizenship in a Changing World under the patronage of Ngwevela.

On Tuesday, there was a showing of the film Invictus at the Russells Cinema.

The film tells the inspiring story of how Mandela joined forces with the captain of South Africas rugby team to help unify South Africa as the country was racially and economically divided in the wake of Apartheid.

Wednesday was Nelson Mandela Dress Day and citizens were encouraged to wear African garb and depict, through dress, the life and legacy of Nelson Mandela.

The centennial activities climax on Friday with a recognition ceremony at the Conference Room of the Ministry of Foreign Affairs, Trade and Commerce in Kingstown, from 10 a.m.