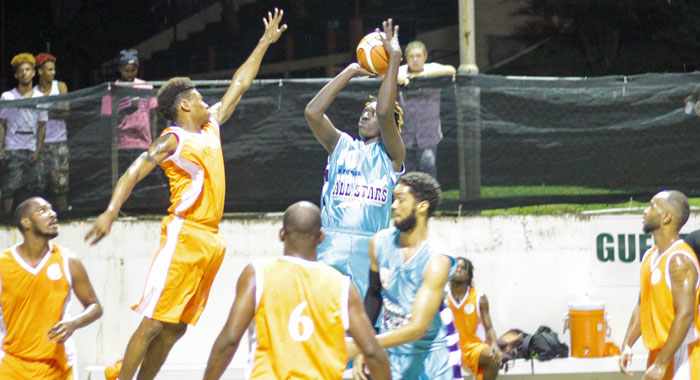 Action in the Bequia Basketball tournament on Saturday. (Photo: BBA)

Last Saturday, July 14, marked a milestone for sports in Bequia when the Vita Malt Bequia Basketball 20th Anniversary Tournament opened with 15 teams registered in three divisions of the 7-week competition which ends Sept. 2.

The Opening Ceremony took place at the Clive Tannis Hard Court in Port Elizabeth, as Bequia once again welcomed the community summer event.

President of the Bequia Association and member of both regional and international bodies in the sport, Sabrina Mitchell, declared the tournament open.

Dignitaries in attendance celebrating the momentous occasion were Minister of Sports, Cecil McKie, Leader of the Opposition and Member of Parliament for the Northern Grenadines, Godwin Friday, Director of Sports, Nelson Hillocks, President and Vice President of the SVG Basketball Federation, Wayne Williams and Karel Bramble, and former Prime Minister, Sir James Mitchell.

The Bequia basketball head spoke of the commitment and dedication of many volunteer individuals over the years, who contributed in various capacities to develop the sport.

She reminisced that the association started from scratch, opening the event in 1999 with four teams playing on plastic backstops and cheap metal rims, a painted blackboard for scoring, and several mounds of dirt surrounding a fenced hard court.

Today, the association brags of the best high tech electronic and sporting equipment in basketball in SVG, the highest ranking qualified referees and players that can rival any in the state.

The investment in the game is also evidenced by four concrete buildings constructed adjacent to the court, from funds raised by the association, and built with volunteer labour of the Bequia players and officials. These buildings house the electronic and sporting equipment and bar.

The development in Bequia is further strengthened by a healthy youth division, which brings in 6 and 7-year-olds to play for the first time every year, thereby ensuring the sport’s sustainability. Bequia Basketball can also brag of significant representation on most of the various levels of National teams, which have players from Bequia, some who have been playing for over 10 years, having started at age 6.

Additionally, the two FIBA qualified referees, Shem Ollivierre and Michael Peniston, have come out of the Bequia Tournament.

2018 has an additional Under 16 team, the Golden Knights, bringing the total number of children’s teams to seven.

The Police United team also join the competition for the first time this year, competing in the First Division.

Mitchell thanked the St. Vincent Brewery for its dedicated partnership over the years, the many Bequia businesses who offer modest, but important financial donations and moral support, and the dedicated fans who love basketball.

She spoke of the main challenge facing the association which is the deplorable state of all three entrance gates to the facility, and strongly implored the attending Hon Minster of Sports Mr. Cecil McKie to rebuild these gates urgently, thereby allowing the Association a vital revenue stream of gate receipts to finance the tournament’s expenses.

A surprise presentation also took place at the opening ceremony, where Ms Mitchell was given a glass plaque.

This appreciation award was bestowed on behalf of FIBA referees Ollivierre and Peniston, and was presented by Reba Ollivierre, who read a letter of thanks from Shem Ollivierre.

The letter highlighted the encouragement he received from Mitchell to become a qualified referee.