PM wants Vincentian MPs to surprise everybody with CCJ vote 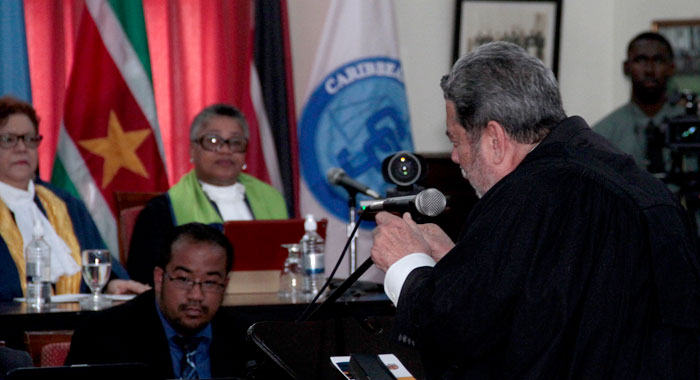 Prime Minister Ralph Gonsalves has asked Vincentian lawmakers to give the region what he considers to be a pleasant surprise and vote to replace the London-based Privy Council with the Caribbean Court of Justice (CCJ) as his countrys highest court.

I want to ask all who belong to our parliament in this country to surprise everybody; to have a unity on this, he said Friday in Kingstown during the courts first sitting in SVG.

The sitting was held to mark the ascension of Vincentian Justice Adrian Saunders to the presidency of the 13-year-old court — the third person to hold that post.

There are some people with their individual problems. They won a case at the Privy Council and they believe that shows that the cleanest waters of justice can only come from the fountain in the Privy Council, Gonsalves said.

You cant personalise this, because there are lots of decisions of the Caribbean Court of Justice where they have overruled courts of appeal from Barbados, from Guyana. I dont know yet about Dominica. Probably. I dont know.

But, the point is this: we have a very good court and we need to use it. Better accessibility, and we will be true to an enhanced ennoblement of our civilisation, our Caribbean civilisation, which has a legitimacy and authenticity and which has a trajectory for further advancement and ennoblement. And we have a noble lord leading us.

He quoted the Trinidadian artiste who sang a song some years ago, asking the question, How it go look?

How it go look that we have our own president of the court and were not acceding to it. And our president is a young man. What were gonna do? Wait until years and years go by and he demits? Lets give ourselves the joy of doing it when he is in the early years where he can feel happy that that the country that has — this landscape and seascape of St. Vincent and the Grenadines, which we have given the region this extraordinary human being, let us place confidence in him and the court.

My words, my lord, might fall on barren ground, but I am hoping that today, this will be a catalyst for action by our Parliament, said Gonsalves, who is Minister of Justice and Legal Affairs.

I am available, tomorrow morning, this afternoon, next week, to sit down with the Honourable Leader of the Opposition and bring a bill to the Parliament to have St. Vincent and the Grenadines accede to the appellate jurisdiction, final appellate jurisdiction of the CCJ, the prime minister said.

In its original jurisdiction, the CCJ interprets and applies the Revised Treaty of Chaguaramas, which established CARICOM and is an international court with compulsory and exclusive jurisdiction in respect of the interpretation of the treaty.

In its appellate jurisdiction, the CCJ hears appeals as the court of last resort in both civil and criminal matters from those member states that have ceased to allow appeals to the Privy Council.

Barbados, Belize, Dominica and Guyana have replaced the Privy Councils appellate jurisdiction with that of the CCJ.