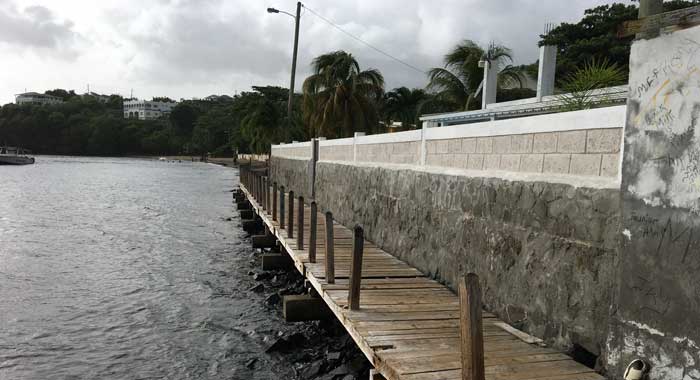 The boardwalk in Villa that runs outside several tourism establishments. (iWN photo)

The manager of a hotel along the tourism strip in Villa is expressing concern about beachfront security at nights.

Kim Halbich, manager of Paradise Inn Hotel, expressed concern to iWitness News after two guests at her hotel were robbed along the boardwalk while walking from the nearby Mangoz Restaurant and Bar, to their hotel around 9:30 p.m. Sunday.

“We need to have more patrols. They used to do a lot more, I am not seeing as much as they used to do before. I don’t know what is the reason. I guess until something happens they won’t come back,” Halbich said.

An adult male robbed U.S.-based Vincentians Christa Gumbs and her only child, Olivia Kirby, along the boardwalk while two youths, said to look no older than 13, kept lookout.

Halbich was happy with the speedy response of the police after the crime was reported, saying they arrived within 15 minutes.

“So, that was good. Normally, sometimes you wait for a long time. Everybody assisted. … The thing about it, we definitely would like to have more patrols. I mean, honestly, the guest can’t walk out on the beach in the night for fear of something like this. That’s not good,” Halbich told iWitness News.

She said that had hotel staff seen the guests exit the hotel at that hour via the beachfront gate that leads to the boardwalk, they would have advised them to take the main road.

“Obviously, it is a big problem though. You know what happened to me here, where I was robbed at gunpoint. I didn’t lose anything but masked men came.

“The thing about it, there needs a lot more security in the area. If we are moving towards tourism, if we have international airport and more guests and hotels are asked to do more rooms and everything, security and police presence have to be stepped up.”

Gumbs told iWitness News that she and her daughter were robbed along a dark area of the boardwalk.

Halbich said that the lighting along the public access way is inadequate.

“It has to be a lot better and I am the one that organised to get the little lighting that they have right now.

“Obviously, it is not enough. I think it needs to be more, but, honestly, I think they need a police presence on Young Island Dock on evenings, and somebody walking up and down, because that’s where most of the people hang out — unsavoury, but I don’t want to say it’s so, because there are some who are really good and there are some that are really bad, and I have to live among them.

“What I would like to say is that they need police presence in that area. The strip. People walk from Mariners [Hotel] to Beachcombers [Hotel].

“If she [Gumbs] had asked, because as a woman, I would not have walked. Even I live here, I’d say to my husband I am going to Beachcombers, watch me while I go down.

“So, I would not have advised. When guests ask me if it is okay to, I would say, ‘Listen, it is better to walk on the road where it is lighted.’ If it is a group, I’d say, ‘No problems.’ But I would not advise a couple or especially two ladies alone to do it, because you never know. You don’t take unnecessary chances and it is not lighted, it is really dark.”

Halbich said that the manner in which the crime against her guest was committed suggests that the perpetrators are very familiar with the area.

“And the people know what they are doing. They waited until they stepped off in the darkest area of the boardwalk and it is unstable footing, because you are stepping off the wooden [walkway] onto the beach, where there are some rock, so they couldn’t run.

“And I think they are just sitting there, waiting, they didn’t plan for them, but they are waiting for anybody they could rob. Because it is obviously a crime of convenience. It just happened to be them. They are sitting there waiting to rob people. That’s how I see it,” she said.

22 replies on “Hotelier concerned about security along tourism strip”