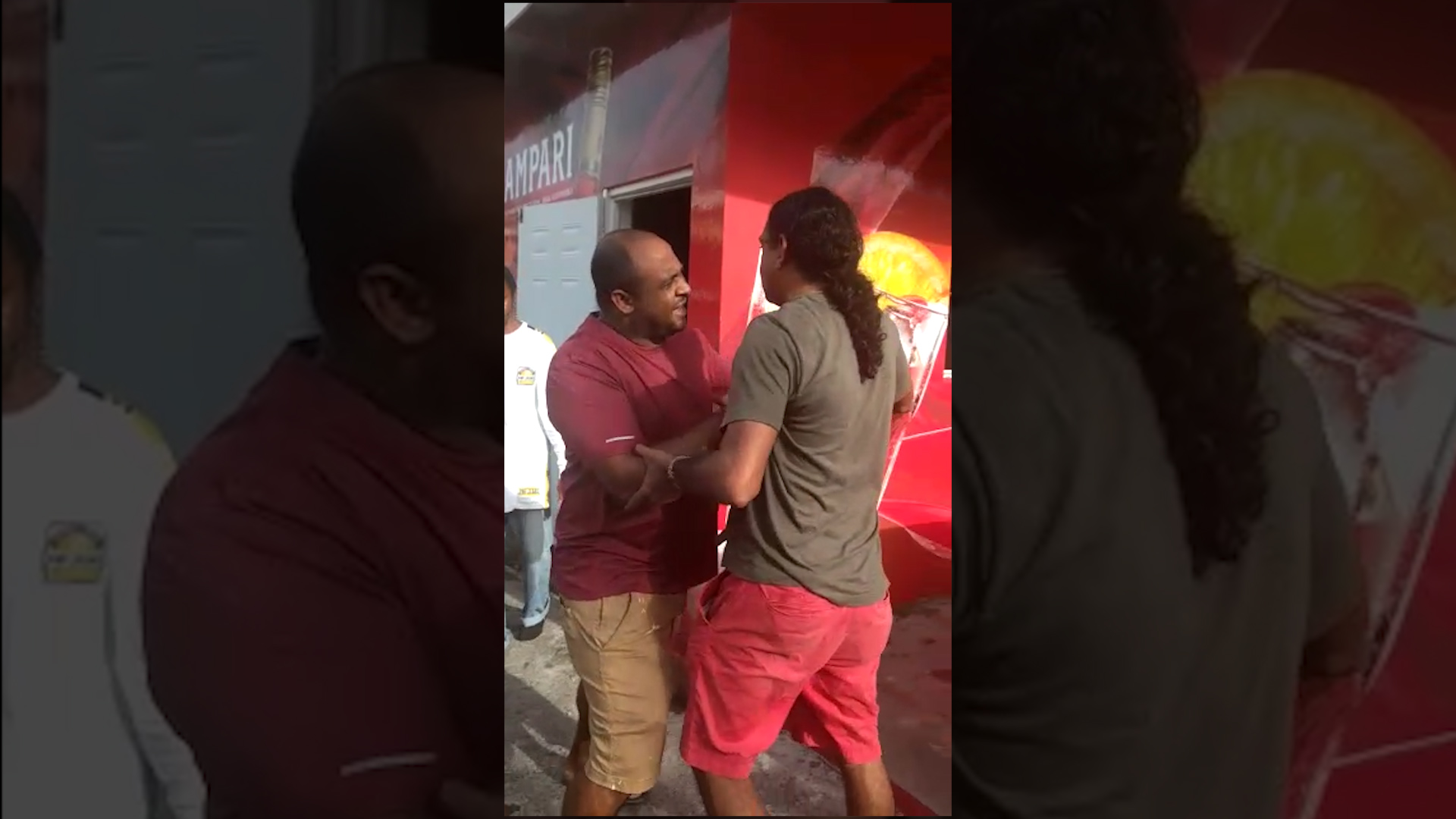 In the ugly melee of a private scuffle gone public in a rum shop at Prospect, a seasoned participant, Ronald S. Marks, senatorial residue and Red Shirt commissar, attempted to intimidate the police with career stagnation: Ah police cyarn get ah promotion in this wourl here, unless me say so. A bit banana-republicy, I’d say. It comes from a shared understanding that the more Third World they can keep their game, then the more power they can exercise — and abuse us with. A triumph for sure. But over what, exactly?

“To threaten is to try to influence by creating an expectation of punishment to be carried out against or reprisals to be inflicted on anyone who disobeys or otherwise behaves objectionably” – Garner’s Dictionary Of Legal Usage.

“Ah police …” is an unwarranted threat, in intent, stated, to our law enforcement. If the shoe was on the other foot, and submitted by prosecutor Marks, the speaker would be judged guilty of blackmail.

It sounded, too, like his ante; and preparatory work to kill a thing he did; then knowed he shouldn’t have did. You know, the sort of thing a criminal lawyer go know good. It was abuse of his senatorial residue; delivered with rum-sodden cadence and with the gleeful betrayal of a carnival barker revealing what goes on in the tent. Thank you rum for doing the quiet thing loud. But we did done kno. Now it is in writing; and irredeemable. The star lawyer can explain “in writing”.

And not to miss in the video is the performance of his pudgy little sister; a future Ronnie. She’s quite the virago; fully loaded.

“Ah police cyarn get ah promotion in this wourl here, unless me say so”, is the shorthand for the way they run the tent. It is, too, flagrant contempt and disregard for, and which undermines, both the Commissioner of Police and the Police Service Commission, the body that — normally — handles other ranks of police promotion. “Normal” is not in Ronnie’s “wourl here” where his Red Eminence outranks the Commissioner and the PSC. Sad! To borrow a Trumpism.

It is the same contempt and disregard the prime minister showed for the Director of Audit and for their report, in 2010, on the corruption in CIHP. Ronnie does learn his lessons good.

Marks and other Red tinpot demagogues assert their right, drunk or sober, to act, free from restraint — or discretion — in a wourl here created by — and for — them. He is an obnoxious narcissist whose obstreperous behaviour and oppressive arrogance will cause him no grief. His sycophantic allegiance guarantees him protection, automatic.

It was the same protection Glen Beache enjoyed with his conflict of interest. All we got was a slick “explanation,” apropos of nothing, from the Prime Minister. Again, when Allan Alexander was uncovered, compromised with insider trading with his private company, Kardab Investments Ltd., the public servant went from promotion to promotion to promotion. It was as if to say: if insider trading is your thing then we are wasting your time in the Ministry of Agriculture. It is better we make it more worth your time. Here, tek promotion. Then, again, Bryan Alexander. He was nearly headed to court, charged with criminal libel after Hans King broadcast — on radio, no less — that he was desirous of hastening Alexander’s mortal end.

Ugh. This needs a recast. So, then, Yellow should suffer criminal libel. And Red? Nada. Except perhaps he should not deliver murder comments — “on radio.” And off?? Wisdom from the tent, dread.

Mistress Dinky bess take note and step cautious with an assault — or any — charge on a Red. Um could boomerang — in this wourl here.

Marks is a parody of himself and his party. The police force cannot rise above the volcanic whims of this arrogant, ill-tempered spoilt brat; least when he uses spite and petulance to engender fear through the threat of police stagnation to control his — and his party’s — “wourl here.” It bothers this joker nought if he puts square pegs in round holes if only to save his ass. Who says you cannot strengthen the weak by weakening the strong?

I had given the ULP’s knight errant the benefit of the doubt for his misadventure in New York five years ago. Not anymore; I get it now.

Marks belligerent showing in Prospect rhymed with New York’s; a cocksure presumption that is manured by Red infallibility and is insured by a ULP protectionism policy. Ah, but the NYPD doesn’t belong to the RSVGPF’s stagnation officer, though. And he noticed … after the fact.

This administration ignores perception. It shouldn’t. “Perception, in humans, the process whereby sensory stimulation is translated into organised experience” — Britannica.

I was listening to 705 news the other day and there was a thing about a government project to do with live animals and the Prime Minister said that they have “animals to distribute”. That is what he said. But I heard loud in my head, “animals to distribute — to ULP people”. I swear to God I heard it clear in my head. There is stimulation of the auditory cortex of the brain in people who hear voices, you know. To them, them does hear for real. So, don’t come and tell me how I-man didn’t hear “… to ULP people”, which then get “translated into organised experience”. I must’ve absorbed the bias from nine unrelenting years of “VOTE LABOUR” to get a wuk stickers on the mobile billboards at the airport. And I absorbed it too from Ronnie’s “ah police …” maxim.

People in positions can do whatever needs to be done to benefit whoever needs to be benefitted. The maxim helped me understand how the wifey, who purloined the Registry wares, made good her escape to Lucia, after which, apart from a token tap on the wrist, the rest is a matter for conjecture.

I mean, is like which police with an eye on “ah promotion” (any not?) go be dotish enough to say they going stop the bandit on the run? Especially when it is trouble to do it, and none not to do it, and the wages is better not to do it.

Her escape was the same as the racketeer who absconded on a pirogue from Chateaubelair. He went like the weasel he is; but wifie went with brass-face sangfroid; maybe Gucci messages and all. Up to today we doan kno how much Gucci and Prada the ex-Registrar made off with but I remember around the time a man make a jail for stealing two tomato. And we are still scratching we head, well, not I, over the thing down Buccament that Citizen Dave lef giv we. Remember the days when they used to sen Black Squad and dog to support and protect the hustler from not paying his labourers?

The police are not SVG’s problem. They are SVG’s scapegoat. Alas, fixing that could be counterproductive. But more, counter-intuitive. Don’t look for the fix. Or the line.