Jail for unlicensed driver who took police on high-speed chase 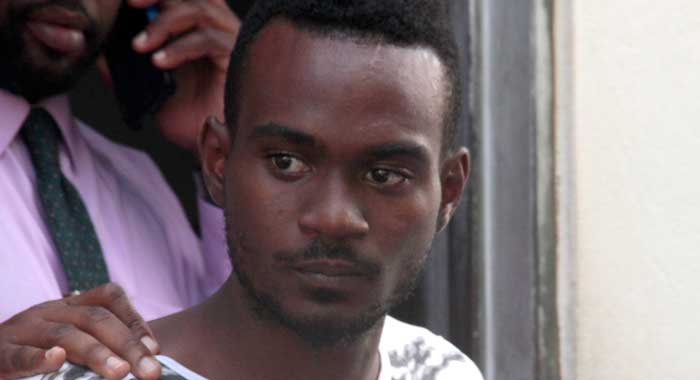 Police saw Kingsley Holder driving while barred from holding a driver’s permit. But rather than stopping when police signaled him to, he took them on a 20-minute high-speed chase. (iWN photo)

An unlicensed driver who was nabbed after an accident in February and barred, for a year, from obtaining a driver’s licence, was on Friday jailed after he was caught driving again.

Kingsley Holder, 25, of Belair took police on a high-speed chase from Gibson Corner to Campden Park, which ended when he drove the vehicle into a dead end.

But where the vehicular chase ended, one began on foot, as the man exited the car and sped into some bushes, where police finally cornered him.

Holder was brought before Chief Magistrate Rechanne Browne-Matthias at the Serious Offences Court on Friday, where he pleaded guilty to three charges.

He was charged that on Aug. 10, at Nelson Mandela Highway, being the driver of motor vehicle P6440, did drive said vehicle whilst being disqualified from holding or obtaining a driving permit for a period of one year at the Kingstown Magistrate’s Court by Magistrate Rickie Burnett on Feb. 28, 2018.

Other charges were that on the same date and on the same roadway, being the driver of P6440, did drive said vehicle without being the holder of a driving permit.

The third charge was that he drove the vehicle without there being in force a policy of insurance with respect of third party risk.

The court heard that on Aug. 10, about 9:30 a.m., PC Lockhart was among a party of traffic personnel conducting traffic checks along the Nelson Mandela Highway in the vicinity of Gibson Corner.

Holder was driving the vehicle and Lockhart knew that the court had barred him from obtaining a driving permit.

Lockhart informed the other police personnel of his observation and they boarded a police vehicle and gave chase.

On approaching the vehicle that Holder was driving, the police officers signalled it to stop by blowing their horn.

However, Holder accelerated and took the police on a 20-minute chase that ended when holder drove into a dead end in Campden Park.

In mitigation, the defendant, who did not have a lawyer, told the court, “Ah wonder if you could give me another chance please?”

Holder, a mechanic, told the court that he had repaired the vehicle, and was going to take it back to the owner in Campden Park so he can get paid, to take his sick girlfriend to the hospital.

However, after probing the man’s story, the chief magistrate rejected it as lies.

“Your explanation is just incredible. It flies in the face of reason and common sense,” she told Holder.

For driving while being barred from holding or obtaining a driver’s licence, Browne-Matthias sentenced Holder to four months in prison, giving him a one-third discount on the maximum sentence, because of his guilty plea.

For driving without a permit, Holder was ordered to pay EC$500 forthwith or, in default, spend five weeks in jail.

He was also jailed for four months for driving an uninsured vehicle.

The custodial sentences will run concurrently.

The magistrate further disqualified Holder from holding or obtaining a driver’s permit for one year, beginning last Friday’s date.