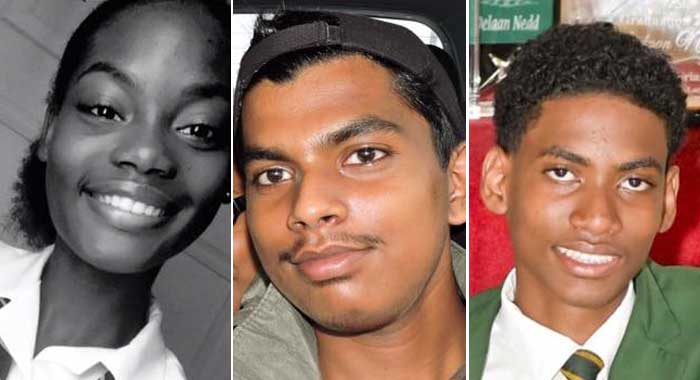 According to preliminary results released by the Ministry of Education on Tuesday, Sariah Jackson of GHS sat and passed 16 subjects, obtaining 14 grade ones, one grade two and one grade 3.

MVAA student Kyle Da Silva’s 16 passes were made up of 15 grade ones and one grade two while Delaan Nedd of the SVGS passed all his 15 subjects at grade 1.

The GHS was St. Vincent and the Grenadines’ top performer in the regional secondary school exit examination, with a pass rate of 97.42 per cent, almost 7 percentage points higher than the second placed school.

In fourth place was Thomas Sanders Secondary School, with a pass rate of 84.89 per cent.

In addition to these seven schools which recorded percentage pass rates of 80 per cent or more, 13 schools, obtained what the ministry described as “creditable pass rates” of between 60 and 80 per cent.

The ministry said 2,726 candidates were registered, 1,052 of whom were private candidates.

There were 1,647school candidates sitting 11,839 subjects entries in 32 subject areas from 26 secondary schools.

Mourine Williams, permanent secretary in the Ministry of Education, said: “The Ministry of Education congratulates all students and extends gratitude to the principals, teachers and staff of all schools for their support of the students. We are cognisant of the fact that the outcomes in education are measures, not only in quantitative terms, but also in qualitative terms; therefore, the value added to the lives of all of the students, the top performers as well as those whose performance can be improved is greatly appreciated.

“All principals continue to work diligently in conjunction with the ministry of Education in support of their schools’ effectiveness and the students’ success.”