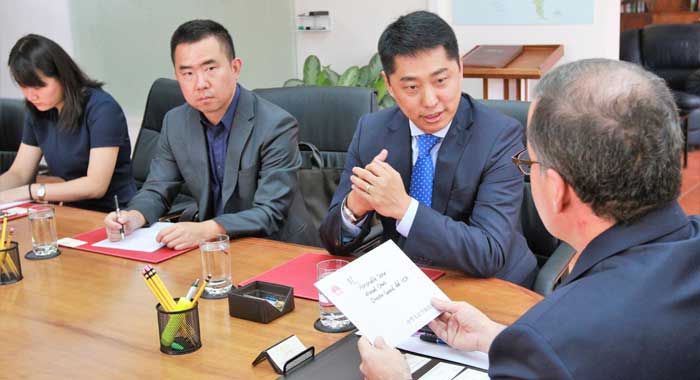 IICA’s Deputy Director General, Lloyd Day, right, accepts the official letter from China requesting observer status in the Institute. The letter was handed over by China’s Ambassador to Costa Rica, Tang Heng, centre, who was accompanied by the Head of the Embassy’s Science and Technology Division, Raúl Lee and Attaché, Huang Xunyi.

SAN JOSÉ, Costa Rica — The People’s Republic of China became the latest observer country of the Inter-American Institute for Cooperation on Agriculture (IICA), which will allow the Asian giant to participate in meetings of the hemispheric organisation’s governing bodies and to further expand its ties with Latin America and the Caribbean (LAC), by generating opportunities for agricultural development.

The status was made official during a visit by Chinese Ambassador to Costa Rica, Tang Heng, to IICA Headquarters.

The Ambassador said: “IICA is an essential platform to promote the development of countries in the region. We look forward to collaborating with the Institute and to use this platform to strengthen our cooperation. Agriculture is an extremely important sector to us, food security being one of the priorities.”

Heng further said: “There are many opportunities for cooperation in the trade of agricultural products with China, given the immense size of its market. We will need to import a large number of products from the region and there is tremendous potential for cooperation and mutual progress in the area of research in technologies for agricultural development.”

China’s observer status in IICA will also foster join action in the areas of trade, agricultural health, research, innovation and technology transfer, as well as experience-sharing for the benefit of agriculture in the Americas.

“IICA is a bridge that can facilitate this rapprochement between the Americas and China, as well as strengthen relationships and contribute to agricultural development in our region,” said Director General of IICA, Manuel Otero.

Otero said agriculture is one of the priorities in negotiations between China and Latin America and pointed out that the Institute can assume an important technical role in this process.

He said: “This is a nation that is investing in Latin America and looking to it as a food supplier for its well-being. China will use the regional platform offered by IICA to work with the Ministries of Agriculture to further develop trade, and we will focus on matters such as health, the contribution of agriculture and research to development, and also to establish a closer relationship with research centers, universities and other entities.”

Latin America and the Caribbean provides almost 30 per cent of the agricultural products imported by China, and the Asian country accounts for more than 13 per cent of LAC’s agricultural exports.

IICA is the specialised agency for agriculture in the Inter-American system, with a mission to encourage, promote and support its 34 member states in their efforts to achieve agricultural development and rural well-being through international technical cooperation of excellence.

One reply on “China granted observer status in IICA”