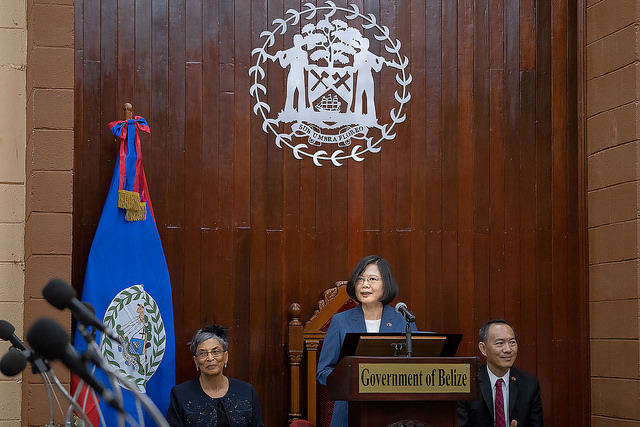 President of Taiwan, Tsai Ing-wen on Friday quoted a Belizean proverb in a context that observers say was meant to warn against the wooing of Mainland China, amidst renewed diplomatic hostilities between Beijing and Taipei.

“It is, of course, well recognised that there are countries in the world that seek to do harm to this relationship,” Tsai said in an address to the Belizean national assembly, in which she recounted some of the ways in which the CARICOM nation has benefitted from its diplomatic relationship with Taiwan.

Tsai continued: “These countries believe that through empty promises, they can sway the genuine friendship we’ve built over the past three decades.

“Well, I know in Belize you have a proverb for that — amongst many other things – ‘No ebery ting, weh gat sugah sweet.’ Not everything that has sugar is sweet. And I know this is a real proverb because I read about it in your Governor General’s book, published 38 years ago.”

Tsai, who was on an official visit to Belize as part of a two-nation tour, said Taiwan is prepared to make more investments in Belize’s agriculture, industry, and infrastructure.

“The construction of new roads, hospitals, and other important projects are especially ideal candidates for our Official Development Assistance programme. From our farmers to overseas construction companies, Taiwan has accumulated a lot of experience that we’re willing to share. And we, of course, look forward to doing so with one of Taiwan’s closest friends and allies, that is Belize.”

Economically, Taiwan is working with the private sector to support their investment and procurement plans with Belize.

“For example, we know Belize makes great cocoa, as well as coffee. I’m a big fan of coffee myself, so I know how important this is to everyone that has trouble getting up in the morning,” Tsai said.

The Taiwan president said that earlier this year, her government worked with some of Taiwan’s largest cocoa and coffee purchasers to organise a delegation to Belize.

“… and you can expect many more of these delegations in the future.

“Furthermore, many members of my delegation are from the business sector, and I will personally be Belize’s biggest advocate in encouraging them to set up their operations here.”

In terms of tourism, Tsai said Taiwan will work with Belize to find ways to bring more Taiwanese tourists to the CARICOM nation.

“I want to emphasize that despite the great geographic distance between our two countries, Belize remains close to our hearts. The Republic of China (Taiwan) is committed to supporting the national development of Belize as a friend and partner. We believe in the great potential of the Belizean people and all that you are destined to accomplish.”

She said that in the international community, Belize has also been an outspoken supporter for Taiwan.

“From the halls of the United Nations to different forums and organisations from around the world, Belize has acted as a voice for the international aspirations of the 23 million people of Taiwan.

“At a time of growing political pressure against Taiwan’s international space, you have spoken for the rights and obligations of Taiwan as a member of the international community.

“Diplomats and civil society representatives from our two countries have worked hand in hand to promote sustainable development goals, and advance our shared values of freedom and democracy.

“On behalf of the people of Taiwan, I want to express my sincere gratitude for Belize’s efforts. Thank you for your unwavering support and friendship.”

She said the relationship between both countries “is not built on empty promises or the political whims of our leadership. This is a friendship that, for the past 29 years, has led to results; results that have benefitted people across both our countries.

“From students to farmers, historians to engineers, mechanics to scientists, Taiwan has touched every facet of Belizean society. This is a friendship built on the real working partnerships between our peoples, governments, institutions, and businesses. And I know that with all of your support, this is a relationship that will continue to stand strong for many decades to come,” Tsai said.

During her trip to Belize, Tsai received from Governor General Sir Colville Young, the Order of Belize — the second highest honour awarded to foreigners in Belize by the government of Belize.

She also presided over a ceremony in which 29 scholarships — the most ever — were given for Belizeans students to study in Taiwan.

Tsai also announced that further to increasing the number of Taiwan scholarship for students from Belize, Taiwan would also be inviting young Belizeans for short-term vocational training programmes in Taiwan.

“My administration has announced we will be providing 520 vacancies to talented young individuals from across our diplomatic allies. And for young people that are unable to come to Taiwan, we are also working with ITVET to improve their teaching facilities and the quality of their training programmes here,” Tsai said.

The Taiwan president visited Belize as part of a tour of the countries allies in the Latin American mainland.

She also visited Paraguay, where she attended the inauguration of its president, Mario Abdo Benitez.